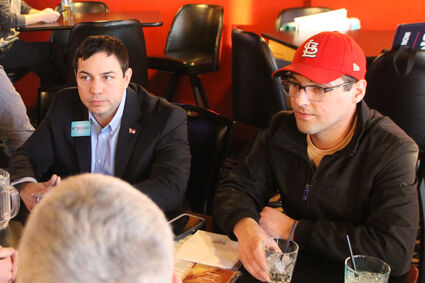 State Auditor candidate Rep. Shane Morigeau, D-Missoula, left, sits next to State Rep. Jacob Bachmeier, D-Havre, Saturday in Havre while listening to members of the community at a meet and greet event.

"We can sit here and we look at documents and papers, but that doesn't really mean anything if you're actually not out talking with actual Montanans or worrying about them and the issues they are facing," Morigeau said.

State Auditor Matt Rosendale announced his candidacy for U.S. House of Representatives rather than running for re-election.