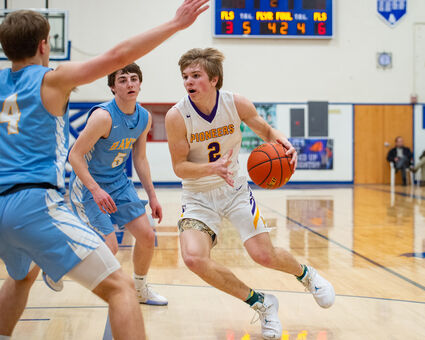 Big Sandy senior Ryan Roth drives the ball during Wednesday night's District 9C game against Chester-Joplin-Inverness at the HHS gymansium. Roth is trying one last time to help the Pioneers get back to divisionals.

Kids all over the Hi-Line dream of playing in the Distrcit 9C tournament. Big Sandy's Ryan Roth was no different.

This week, however, Roth is playing in his fifth 9C tournament, which will, emotionally, also be his last.

The 6-1 senior has been a force for the Pioneers this season. There have been many times he has scored in double figures. But Roth is not just great at scoring points naturally. He's been working since he was young to get better in his game.

Over all the seasons Roth has played with Big Sandy, he has further developed a strong love for the sports he plays, which are foo...