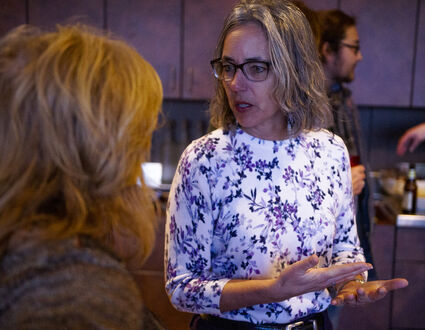 Former state Rep. Kathleen Williams, D-Bozeman, candidate for the U.S. House of Representatives, was in Havre Thursday for a meet and greet event and spoke about her campaign.

The seat is held by U.S. Rep. Greg Gianforte, R-Mont., who announced last year he would not be running for re-election in the House but will be running for governor of Montana.

Since he announced his campaign for governor, a number of Republicans and Democrats across the state have announced their candidacy for the seat.

In addition to Williams, on the Democratic side of the ticket, state Rep. Tom Winter, D-Missoula, has also filed as a candidate for the office.

Williams said in an interview that her campaign this year has been going really well with a large amount of support from the communities she has visited. She said that when she ran for the office in 2018, losing a challenge to Gianforte's retaining the seat, she got a lot of good feedback on her campaign and heard a lot of stories from Montanans across the state which motivated her to run for office again.

She added that she was the closest any Montana Democratic candidate has been in 20 years to beating an incumbent in the House, and, because of that, she has good name recognition. She said she has heard from a number of people across the state that she ran out of time last election and if she'd had two more weeks she could have won the election.

"The first time I ran it was really, and it continues to be, about fixing a broken Congress and really getting Congress to work again for Montana and for the nation," she said. "I have a unique ability to break through hyper-partisanship and I think I could be an asset out there."

Williams said she has been working on policy throughout her career and is ready to work on the complex issues facing the state. She added that she wanted to run for office again because she wants to return civility, integrity and statesmanship to Congress and rebuilt the broken system.

Another reason why she wanted to run for office was because of the stories she heard from Montanans during her last campaign, she said.

"We need someone out there who isn't just a politician but can get to work and bring back solutions," she said.

She added Congress is not working on the issues, but, if elected, she will focus on getting things done.

Williams said some of the biggest concerns she is hearing from people while on the campaign trail revolve around health care, not just the cost of health care but, the accessibility and the complexity of health care. She said she also wants to work on rebuilding the American Dream and wants to see the government invest in public education and create an economy that works for everyone.

The nation's economy is doing pretty well, she said, but some people are working multiple jobs to pay rent, put food on the table or pay health care costs. She added that she was elected into the state Legislature shortly after the Great Recession and, during her time in the Legislature, she focused on diversifying and expanding the economy, something she hopes to do on a national level if voted to the House.

Williams said that can be accomplished by fostering small businesses and working to find opportunities in manufacturing and processing as well as supporting agriculture and investing in economic development programs. She added that is something that needs to be done not just in urban areas, but also rural areas.

"It means being grounded in what the hopes, struggles and dreams of Montanans are and working every minute to fulfill and advance those dreams and work to solve those struggles," she said. "So, to me, that's a true representative ... and a true public servant."

She said hyper-partisanship is detrimental to the country and to the people. The American people need to elect people who will work to work across the aisle and work together to find solutions.

"The hyper-partisanship in Congress has got to end and you can't wave a magic wand and make it end, but you have to elect people that are skilled in the art of finding common interests in unique places," she said.

Last week, President Donald Trump released his budget proposal, "A Budget for a Better America," and Williams said it is Congress' job to review the proposal and create their own budget.

"It's Congress' job to pass a budget that reflects the values that they are there representing," she said. "So the president has provided some ideas, but it's going to need some work."

She added that a lot of people are concerned about some of the budget cuts proposed in the president's budget, such as cuts to Medicaid, Medicare, Social Security and the student loan forgiveness program. She said those programs are critically important to many Americans, especially people who live in rural communities. She said that, for example, the student loan forgiveness program is an important tool rural communities use to attract people such as nurses and teachers to their communities.

Congress has had issues in the past balancing and creating a budget that works for the country, Williams said, adding that in her time in the state Legislature she learned the importance and the impact of a government passing a budget. The state Legislature is required to balance a budget every session and she wants to see something like that on the federal level, she said.

The key to making improvements to Congress and having a Congress that truly works for the people, she said, is voting on people who know how to work across the political aisle and work with people to find common ground solutions what can work for everybody.