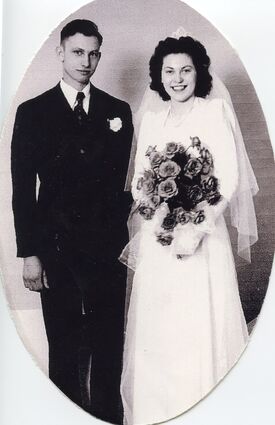 Elizabeth "Betty" Solomon Majerus joined her husband, Leonard, and her three daughters in heaven with her family at her side at Lasting Legacy Sunday March 1, 2020.

She was born March 23, 1926, in Havre to Chester Joseph and Delia Merle Redwing Solomon. Betty grew up on the family ranch south of Havre and went to country school until her high school years. She graduated from Havre High School in 1944 and enrolled into nursing school.

June 27, 1945, she married Leonard Majerus in Havre and moved to their own little place. It was here that they started their family in 1946 and then moved to the Carmichael place south of Roundup in 1948. As the family grew, they transformed their home into the Majerus Ranch where they always had an open-door policy.

It didn't take long for the new family to become involved with the neighbors and their lifelong friendships as they joined the community dances and the Roundup Ridge Riders. They were involved in the community activities at Klein and Roundup and active members of St. Benedict's Catholic church. They could be found working at the dinners at the church, the annual St. Benedicts Turkey dinner and the John Deere Day dinners.

In 1964, Mom and Dad bought into the A and A Implement dealership. This also got them involved in the Chamber of Commerce, Fourth of July rodeo and later the fair board. Mom was always at Dad's side in these endeavors as his right hand and secretary.

Rodeo was a fact of life in her family between her bother and her kids participating. She enjoyed watching her family from the Little Britches through high school and the collegiate and the pro rodeo levels.

Traveling was important to Betty, she even managed to get Dad off the ranch to travel with family and friends. Their adventures took them to Mexico, Australia, Tahiti, California, Hawaii, Alaska and even a pilgrimage to Europe. The family celebrated with them on a family trip to Florida and also a cruise trip to Hawaii to celebrate their anniversaries.

Since family and community were important to Betty and Leonard, their kids hosted parties to celebrate their 40th, 50th and 60th anniversaries.

The family would like to thank the staff at Lasting Legacy for the outstanding care that she received over the past 15 months. Memorials may be made to St. Jude's Children's Hospital or the charity of your choice.

Interment will be 1 p.m. Saturday, March 7, at Calvary Cemetery in Havre.

Arrangements are in the care of Dahl Funeral Chapel and memories may be shared with the family at http://www.dahlfuneralchapel.com .