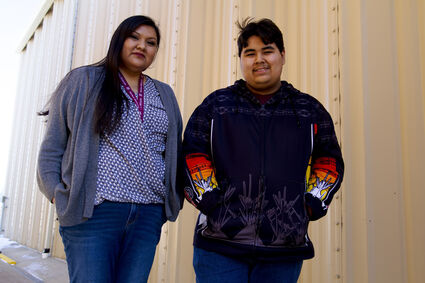 Language Arts Teacher Crystal Doney and Dreamstarter grant recipient Dante Jackson, 16, pose for a portrait Monday outside of Harlem High School. Jackson, a junior at Harlem High School, was awarded the grant through the Running Strong for American Indian Youth Foundation to help him implement a mentorship program for elementary students.

A Harlem High School student just received a grant to support his idea to help the younger generation for a better future.

Dante Jackson was notified last week he was awarded $10,000 in the Dreamstarter program to implement a mentorship program for elementary school students.

He said he hopes to see younger students make good choices and build a bright future for this community.

"It really came from, I guess, how I was raised because I feel like a lot of kids around here lack work ethic, they really don't do anything unless they are getting something out of it, and unless they plan to...