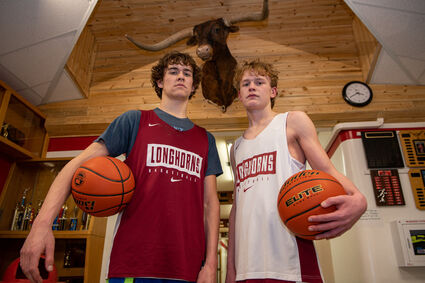 Fort Benton's Garrett, left, and Hayden Diekhans have been playing basketball, and sports in general, together for years. But, since they became teammates in high school, they've helped lead a boys sports revival in Fort Benton, including the Longhorn's first trip to a state basketball tournament since 1992.

Local sports has been graced with some amazing pairs of players that shine in their respective passions. When it comes to the 2019-2020 District 9C basketball season, duos like Turner girls basketball's Sarah Billmayer and Shyan Krass or Big Sandy boys basketball's Ryan Roth and Clint Darlington have made a big impact on the court.

But there is one duo of brothers that have been lighting up the hardwood since day one, Garrett and Hayden Diekhans.

The Diekhans brothers have been superstars for the Fort Benton boys basketball team this year. The two are playmakers on both sides of the ball and the brothers live and breath sports. On top of that, the duo has shared a great part in reviving Longhorn's sports in recent years, too, especially this seasons' undefeated run to the Class C state tournament.

The eldest of the two, Garrett, has had the pleasure of working alongside his younger brother, and his team, to help make a difference on the court, as well as the football field, the track, and anywhere else they can compete.

"We've been playing together for as long as I can remember," Garrett Diekhans said. "We get on each other a lot. We expect a lot from each other. At the end of the day, we're all trying to do the same thing here and achieve our goals. Having two people with the same mindset makes it lot easier for everybody else, too."

Hayden and Garrett share a lot of things in common. Both athletes carry an intimidating height that makes them difficult to go toe-to-toe with on the court, a passion for the sports they play and an overall knack for the game of basketball. When they get going, the Longhorns are a force to be reckoned with.

For Hayden, he has been getting better every day to help his team. After all, playing with his older brother has made a difference in his game.

"I know that he'll always have my back and that I can count on him," Hayden Diekhans said. There's always a sort of competition between us, so it's been nice. He's influenced my game because I've always had to shoot over him. It's been great to have a bigger defender like him to go up against. If Garrett's hot, I'm going to get involved."

There is no shortage of great moments that the two young men have shared. The Diekhans brothers put forward a huge effort against Chinook in the District 9C championship game this year. The duo even started off that matchup with a combined three defensive blocks.

Not only is their level of play high, but so is the character that the Diekhans brothers share. They are polite but intense, humble but fierce and overall, the young men make sure their teammates are playing to the best of their ability and are in sync.

But the brothers see each other's strengths in different ways, which helps them know exactly what needs to be done when they play together, too.

"Garrett's inside presence stands out," Hayden Diekhans said. "He's able to block everyone's shot and finish up at the rim."

"Hayden's a lefty," Garrett Diekhans said. "There's not a lot of lefties around that play as big as he does. He grew quite a bit and is on top of this game right now."

As always, the siblings have each other's backs at all times, but like most siblings, the Diekhans brothers love to compete with each other. Garrett and Hayden butt heads in the best kind of way. After all, the rivalry the brothers share helps shape them into a better competitor on the hardwood.

In fact, the two often spend time going up against the other in a highly competitive one-on-one basketball game off the court often. The bout has seen its fair share of wins on both sides, but the Diekhans brothers once again have different viewpoints towards the friendly rivalry.

"It was usually Garrett at the beginning," Hayden Diekhans said. "But now it's been a little bit closer since I've grown a bit. When I was younger, he'd always beat me because he was always bigger."

"There's been quite a few matchups back in the day," Garrett Diekhans said. "I don't know what the record is, but I think got for now for a little bit until he outgrows me. I think he might catch up, but I think I could still beat him."

The battle between the brothers shines a light onto how much their spirit for improving their game translates onto the hardwood. The Diekhans brothers take great pride in their abilities and make sure to acknowledge each other's weaknesses, as well.

And even though the two share a healthy rivalry with one another, there is still some aspects of their game that the other brother will admit is better-displayed through their sibling. For Hayden, his brother carries a lot of fire in his game, which makes him stand out.

"Garrett is pretty competitive," Hayden Diekhans said. "He'll get really angry sometimes about the game, but I know that when he's fired up, he'll pass the ball to me and help me have a good game."

When it comes to what Garrett thinks his brother excels in, it so happens to be his younger brother's accuracy when it comes to making half-court shots.

"Hayden can sink a half-court shot for sure," Garrett Diekhans said. "It's insane. There will be times in practice where he's screwing around, he'll grab the ball, throw it up at half-court and it'll go in."

In the end, the Diekhans brothers make each other great and make Fort Benton basketball even greater. Since the two have been on the court, amazing things have happened for them and the Longhorns, as Fort Benton continues to stampede.

Over all the years that the Diekhans duo has played with one another, there have been amazing memories, too. But one stands out in particular for Garrett and it dates back to about six years ago.

"We were playing in a three-on-three in Conrad in like sixth grade," Garrett Diekhans said. "We kept losing to this team in the round robin and made it back to the championship. It was a super-tight game the whole way. Hayden made a free throw to send it into overtime and then a crazy floater to win the game. It was super cool to see because I'd always wanted to play basketball again."

Yes, the Diekhans have that bond, the kind that only brothers who are also teammates understand. And they've been at the forefront of a sports revival in Fort Benton, one that will continue with this weekend's state tournament in Missoula.