Havre loses to Central in Class A semifinals 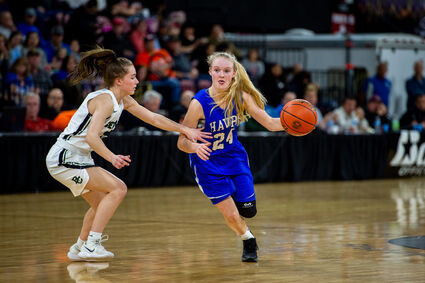 Havre's Sadie Filius, right, drives the ball past a Billings Central defender during a Class A state tournament semifinal game in Billings. The Rams beat the Blue Ponies, and, afterward, the remainder of the tournament was cancelled due to growing concerns over COVID-19.

BILLINGS - With the quarterfinal win over the Hamilton Broncs, the Havre High girls basketball team was ready to face their biggest challenge yet, to take down the Billings Central Rams in the semifinals of the Class A girls state tournament Friday evening in the First Interstate Bank Arena at the Metra in Billings.

Unfortunately, the Blue Ponies fell to the Rams 50-43 and did not have their chance at a three-peat as state A champions.

On top of that, Havre did not get the chance to try and claim third place either, and their season has ended, as the Montana High School Association releas...