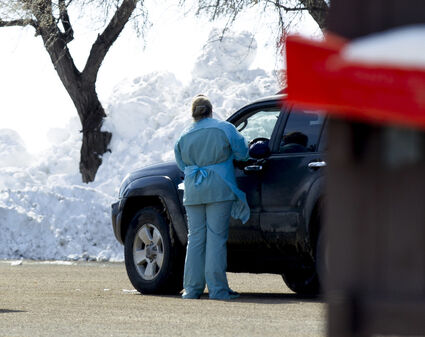 A Northern Montana Health Care employee in full personal protective equipment talks with a patient in a car Tuesday outside the alternate clinic used for COVID-19 testing and treatment in Havre.

Northern Montana Health Care public relations officer Julianne LaSmith said that, as of Wednesday, 26 people have come to the alternate flu clinic NMHC has set up for novel coronavirus 2019, and no cases of the virus had been confirmed in Hill County.

LaSmith said Northern Montana Hospital started out with 20 kits to test for the virus, adding that they aren't using the test kits on everyone.

"The testing is done as a way of determining the next course of action," she said. "It is entirely up to our providers that are seeing the people in the flu clinic as to which ones will be tested, but it's not something that someone can request."

The decision to test has to come from a doctor, she said.

"If they are showing the symptoms, the flu-like symptoms, which is sore throat, cough, fever, some stomach issues, when they feel like they cannot manage those symptoms at home they do need to come in and speak with a provider," LaSmith said.

If they are feeling ill with flu-like symptoms - sore throat, cough, fever, difficulty breathing and so on - they should call the flu clinic at 262-1570. They will then be directed on how to proceed.

After hours, they can call Northern Montana Hospital at 265-2211 and ask to speak with the administrative director on call and they will be advised as to their next steps.

"When they are met at the doors of our two operational clinics, they are screened at the door and they are being sent over to the flu clinic if they have the flu symptoms," she said. "We are also asking that if an adult comes to the hospital that they only bring one other adult support person with them. We would like to discourage the whole family waiting in the car and we definitely do not want any children in the building unless they are to be seen by a medical provider."

The best plan for everyone, LaSmith said, is social distancing, generally staying away from crowds and keeping a distance from people, and if feeling sick at all to stay home.

"We are operating with an overabundance of caution," LaSmith said.

The Emergency Department on the second floor is the only entrance point for the hospital and any people entering will be screened, NMHC said in releases over the weekend.

LaSmith said people are asked to call 2211 before going to the emergency Department if possible.

In the Labor and Delivery Department at the hospital, laboring mothers will be allowed one adult support person to be with them, the release Sunday said. There will be no children admitted into the department under any circumstances.

If a patient is facing imminent death at the hospital, the release said, special arrangements will be made for visitors.

Montana Department of Public Health and Human Services said that, as of this morning, no cases had been confirmed in Hill, Blaine, Chouteau or Liberty counties.