By Rachel Jamieson and Patrick Johnston 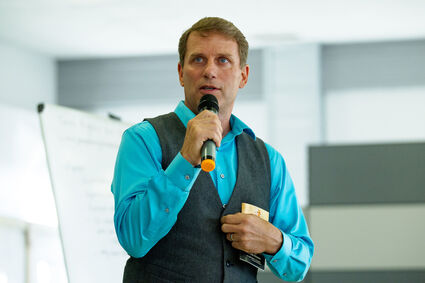 This story is the first in a two part series about People's Rights Montana District 1. Watch for Part II in Monday's edition of the Havre Daily News.

Local residents have been meeting at events sponsored by an organization with ties to anti-government activist Ammon Bundy, a group demanding Gov. Steve Bullock resign, be impeached or be arrested for his directives during the COVID-19 pandemic, saying they violate people's constitutional rights.

"People's Rights is a nationwide development of people just standing up and pulling together as neighbors to understand their rights and if necessary to defend one another's rights," People's Rights Montana District 1 Area Assistant Jerry Taylor Jr., NMD, who has a naturopathic medicine practice in Havre, said in an interview Tuesday morning.

People's Rights Montana District 1 has been holding meetings in Havre in the former Tilleman Dodge location on U.S. Highway 2 East.

The website was updated after the group's meeting this week to say the Aug. 11 meeting will not be held and the group is encouraged to attend the Havre Public Schools Board of Trustees meeting that night instead.

The website says "People's Rights is a nationwide movement dedicated to the defense of our individual, God-given, inalienable rights as defined in the Constitution of the United States."

Travis McAdam of the Montana Human Rights Network said the network believes these groups are more than just gatherings of Montana residents trying to protect their constitutional rights.

McAdam said Montana Human Rights Network believes Ammon Bundy, who has spoken at events in Montana, is using the national organization to try to establish a beachhead in Montana, creating groups that essentially are local militias or patriot groups. McAdam said that could end with events like the Bundy family 2014 armed standoff with the federal government near Bunkerville, Nevada, and Bundy's occupation of Malheur National Wildlife Refuge in Oregon that led to the shooting death of one of Bundy's supporters when law enforcement officers attempted to arrest him and he was reaching for a pocket that held a loaded 9mm Ruger SR9.

The Bundy's basic claim is that the federal government has no authority to regulate federal land.

McAdam said the way the People's Rights organization is styled makes it sound like an innocuous group pushing for basic rights, but Montana Human Rights Network believes it is more - he called it the Pied Piping of a family with a history of armed standoffs with the federal government trying to recruit more followers.

McAdam said Montana Human Rights Network sees no benefit to communities to buy into what Peoples Rights is offering, no good solutions. The group is trying to tie into spreading misinformation on COVID-19 and the pandemic to capitalize on the fear and uncertainty that exists and use it for recruitment, he said.

"We don't think it's beneficial for the Bundy family to be gaining any kind of a foothold in Montana communities," McAdam said.

The basic complaints of People's Rights Montana are listed in a lengthy document the group calls a "Redress of Grievance petition" it says has been distributed to state and local officials including Bullock.

The document calls for the resignation, impeachment or arrest of Bullock for what the document alleges are violations of the U.S. and Montana constitutions and laws.

Bullock said in an interview Wednesday that he has not received the document, as have several local officials listed on the website to whom the website says it has been sent.

He did say that the safety measures are not illegal or unconstitutional.

The document says Bullock's mandates are violations of rights including freedom of religion and freedom of assembly and that life, liberty and property will not be infringed upon without due process of law and of people's ability to fulfill contractual obligations.

Bullock's office told the Havre Daily News for a previous article that the U.S. Supreme Court has consistently ruled that directives such as what Bullock - and other Republican and Democratic governors - are issuing during the COVID-19 pandemic are constitutional.

"For over 200 years, the United States Supreme Court has affirmed the authority of states and localities to combat communicable disease under the 10th Amendment," Bullock spokesperson Erin Loranger said.

The People's Rights document also lists the constitutional and Montana law sections Bullock refers to in his directives and says those sections do not grant him the authority to issue his directives.

One of the sections of Montana Code Annotated listed by the People's Rights document, which the document says does not grant him the authority to issue the directives, MCA 10-3-104,  states the governor during a time of declared emergency can control access to and occupancy of premises in an area declared an emergency.

Another, MCA 50-1-204 that the state "may adopt and enforce quarantine or isolation measures to prevent the spread of communicable disease."

The group has also offered placards to local businesses that the businesses can post. The placards say, "This business is protected by the people of the state of Montana. Any government official trying to enforce the governor's unlawful (directives implementing executive orders) is required to call this number prior to entering. 406-945-2346.

Bob Ingram said at Tuesday's meeting that is his number.

Among people listed as being invited to join the Facebook group were Hill County Commissioner Diane McLean.

McLean declined to comment Thursday on the invitation or on the group, and its stated goals and actions.

The website includes invitations to the group's meetings at the former Tilleman Dodge location, a copy of its "Redress of Grievance petition," a Resources section that links to a six-part video series by the John Birch Society, a News section and offers to join the group and to contact the group.

He said the organization is uniting neighbors to defend the rights and the freedoms from being taken from them.

All kinds of constitutional rights are being violated, he said.

"If I want to wear a mask to protect myself if I feel like it's necessary to protect myself I should be able to choose that for myself," Taylor said. "No other human being on the planet has the right to force me to do anything whether it is good or bad - those are our constitutional rights."

The Centers for Disease Control and Prevention's website says the primary use of masks is not to protect oneself from contracting the virus but to prevent yourself from potentially spreading it.

Taylor said he believes masks make people more susceptible to the illness, an idea he expanded upon during the meeting.

During the meeting, Taylor said he doesn't begrudge people who wear masks by choice, nor does he begrudge business owners who ask that their customers wear them.

"If I go into a place (without a mask) and they ask me to leave, I'll leave, it's their property it's their right. I'm not a hypocrite," he said.

He and many others at the meeting made fun of people who do wear masks outside or while driving.

Taylor said Tuesday morning that Bullock giving orders about the pandemic is unconstitutional and unlawful.

"We are telling him that he is out of line, and if he doesn't get himself back in line, then he needs to step down from office," Taylor  said.

This sentiment is one that is not directed exclusively at Bullock.

"Lifetime majority politicians, in my opinion, are criminals," Taylor said during the meeting.

He also said Bullock's directives are a deprivation of civil rights under federal law.

"There is no moral authority on the Earth to take a right from me unless you give it up," Taylor said Tuesday morning.  "... Rights are established by being first in time, first in right. So I'm the first one there, it is my idea I can claim that right, and that is my right forever it's an unalienable right."

During the meeting, he compared people in groups like his to the Founding Fathers, and said, people should be prepared to defend themselves physically if necessary.

"(The Founding Fathers) were the extremists, they stood up and fought for their freedom and the freedom of all their brothers," he said.

Right now, he said during Tuesday's interview, what is being done is tyranny.

"Our rights and freedoms are being usurped, we have a constitutional obligation to issue a redress of grievance to whatever government body is overstepping their bounds," he said. "The Founding Fathers warned us about this, they warned us about tyrannical government."

Taylor said no one in the county has the authority to enforce the directives.

"Kim Larson, Jessica Sheehy, the people part of the Hill County Health Department they are no different than you and I - it's like how am I going to enforce my will on you?" he said. "... Write a ticket? Put you in custody? Throw you in jail how are they going to do that and where does their authority come from? It can't be from the governor, he doesn't have that authority."

The ultimate authority in the county, he said, is the sheriff and the sheriff is directly accountable to people.

Hill County Health Director Kim Larson said in an interview with the Havre Daily News for a previous article that the third step of enforcing the pandemic health directives is for the county attorney to take legal action which could include filing legal complaints and civil injunctions in court.

Larson also said this morning that the county health department does have the necessary expertise.

"Public health is not a well-known or understood profession, but the wealth of knowledge and education that the Hill County Health Department staff has is a testament to how dedicated we are in doing our job, even when it's not appreciated by some," she said. "We know the work we do is making a difference in our community, and we will continue to do what we can to protect and be here for the community of Hill County."

Taylor said people who are qualified to do this are medical doctors, doctors who treat this on a front-line basis all the time.

"Stop wearing the mask and treat this," he said. "... Wearing a mask to stop the virus that is this size is like building a chain length fence to stop mosquitoes. It simply doesn't work, but it does cause damage to the individual and the psycho-emotional damage it causes to our kids and just our society in general."

The actions Bullock has been taking are recommended by medical doctors and researchers and medical agencies and groups like the Centers for Disease Control and Prevention, the National Health Institute and the American Medical Association 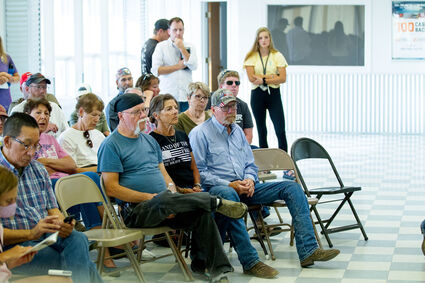 CDC Director Dr. Robert R. Redfield in an article on the CDC's website said, "Cloth face coverings are one of the most powerful weapons we have to slow and stop the spread of the virus - particularly when used universally within a community setting. All Americans have a responsibility to protect themselves, their families and their communities."

Taylor said he believes social distancing and masks are a tool of politics, not medicine.

"It is dividing our country," he said. "It is doing exactly what it was intended to do. These are political activities not medical safety. All of it."

During the meeting Taylor said part of the reason he's doing this is because of what he believes God told him.

"I'm doing what I feel is right," he said. "I prayed and fasted and I'm trying to follow the directive the Lord gave me."