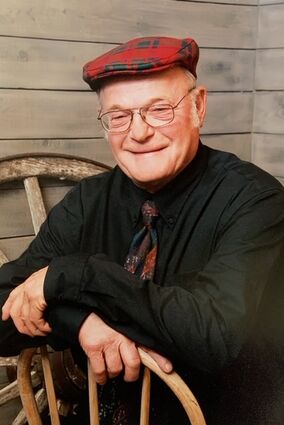 Stuart M. McIntosh, 91, passed away due to natural causes at his home surrounded by his family Monday, September 28, 2020.

Funeral services will be held at 11:00 a.m. Thursday, October 1, 2020, at Fifth Avenue Christian Church. Burial will follow in Highland Cemetery.

Stuart's family has suggested memorial donations be made in his memory to the Boys and Girls Club of the Hi-line or to the charity of the donor's choice.

Please visit Stuart's online memorial page and leave a message of condolence for his family at http://www.hollandbonine.com .

Stuart MacKenzie McIntosh was born to Alexander and Ella (Starche) McIntosh September 30, 1928, 25 miles north of Havre, at the farm home. He was named after the doctor that delivered him, Dr. Stuart Mackenzie.

Stu's dad, Alex, was born in Nairn, Scotland; his mother was born in Ashland, Wisconsin. Stuart was very proud of his Scottish heritage.

In 1907, Alex worked on a sheep wagon camp, and in 1910 he homesteaded in a 12x16 ft. shack in north Havre. Alex met Ella in Great Falls, where she was employed as a nanny, and they married in 1916. To this union, eight children were born: Roderick, Robert, John, Albertine, Gladys, Jimmy, Martha and Stuart.

Stu went to country school until the fifth grade; his education continued in town, where he attended school through grade eight. He returned to the farm to work alongside his dad and brother Robert while his brothers Roderick, John and Jimmy were called away to serve in the armed forces during WW II.

Leaving the family farm, Stu went to work on the Clack ranch located north of Havre. From there, he worked for Stromberg's fuel distributing company in Havre. For a time, he worked as manager for Stromberg's in Glasgow. He returned again to the family farm, and part-time for Kreselak's butcher business in town. Attaining the age of 17, he worked for the railroad for three weeks, and stated he "sure didn't like that!" He later worked for Buttrey's in Havre, cutting meat as well as loading trucks.

In 1949, he married Eva Springer, who was also working at Buttrey's in the Shoe Department. The newlyweds began renting the Neuworth farm at Simpson, 48 miles from town, which they later purchased. During their farming career they raised a family of three, Bonnie, Alec and Steve. In the beginning years of farming, Stuart became interested in producing quality seed and the dream of cleaning seed began on a small scale.

In 1964, the family moved 7 miles closer to town, where they built their new home and moved multiple buildings to the new site. At the new farm location, the seed processing business continued to expand. Having outgrown the farm's seed cleaning capacity, in 1980 it was decided to relocate the business in Havre with sons Alec and Steve.

In 1999, Stu and Eva moved to town, to their home by Havre High School. Later, Stu began the process of selling his seed plants and shifting his focus to raising corn at the new homestead. It was in June of 2003 when Stu lost his wife, Eva.

In 2006, Stuart married Carol Lippert. They were brought together with a love for dancing, which they enjoyed together for several years. During their marriage, Stuart was most appreciative of the love and acceptance from Carol's family.

Both Stu and Carol also found a joy in gardening together. Year after year their garden grew, especially the corn! Stuart's other hobbies included collecting and restoring vintage tractors, enjoying a game of pinochle, which he was very skilled at, and playing with his beloved Samoyan husky, Sunshine.

Stu says it's been a great life. He attributes his success in life to his wonderful family. Stu liked this saying "There are three kinds of people in this world: The dreamers who dream about doing things, the complainers who complain about the things being done and the doers who get things done."

Stu was a doer, as anyone seeing him working in his corn patch from early morning till dark can attest to. His personal qualities included his ability to strike up a conversation with a total stranger and a genuine interest in Montana and local history.

Stu was a lifetime member of Grand Lodge of A.F. & A.M. of Montana

He was preceded in death by his wife Eva; parents; and siblings, Roderick, John, Jimmy, Robert, Albertine, Martha and Gladys.