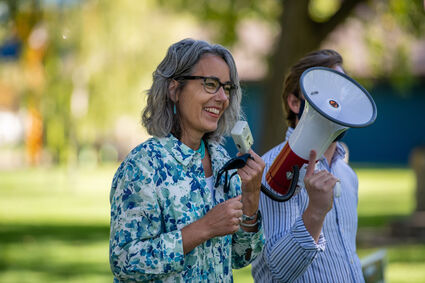 Kathleen Williams campaigned in Havre Saturday as part of her six-day, 24-stop, 2,000-mile tour across the state of Montana Solutions Tour.

Gianforte is leaving his office in a bid for Montana governor and faces Democratic Lt. Gov. Mike Cooney and Libertarian Lyman Bishop in that race.

Havre was part of her Day 3 in the tour, followed by traveling to Great Falls and Helena Saturday.

"The reason I'm running is to be a true independent voice for all of Montana not just special interests," Williams told the people at the event in Pepin Park.

She said her father was a World War II veteran, her mother was from Bluejacket, Oklahoma - she left there at age 18 to work for the U.S. Navy on the West Coast.

The two of them met there and the result was four girls, she said.

"From my upbringing, I have taken with me through my life the value of hard work, the importance of serving community and making your own way, and I've made my own way in this world," Williams said. "Created a 37-year career in natural resources with a speciality in water, so 20 years ago when the St. Mary's working group got started I was involved with that and have been working on water issues all through Montana and across the West."

A lot of her career has been working with farmers and ranchers, she said.

"I am absolutely committed to ensuring that our ag sector and rural communities can thrive like they once did," she added. "I can't wait to get to work on that - there's going to be a new farm bill coming down the pike and I will be well-positioned to bring Montanans together to talk about what the next farm bill should be like."

Before the pandemic, she said, between this year's campaign and the campaign in 2018 - she unsuccessfully challenged Gianforte in that race - she has put 75,000 miles on her vehicle, traveling corner to corner in Montana.

Montanans have three consistent themes they want her to work on in D.C., she said.

One is health care.

"We've got a patchwork ... we need to ensure that everyone has access to quality, affordable health care," Williams said.

She said health care is personal to her. For eight years, she and her father were her mother's caregiver until she died, she said.

She added that she knows what a health care crisis can do to a family.

"In the Legislature, in my three terms in the Legislature what did I work on? It was health care, natural resources and our economy," she said. "I was elected into the Montana Legislature in 2010, as Montana was trying to get itself back on its feet after the Great Recession, and so I got to work right away to grow and expand our economy, and strengthen it on the other side so we didn't have the crash that we did especially in my area that was incredibly dependent on construction.

"We needed to diversify that economy, so that we didn't take the whole economy down if one sector had some trouble," she added.

There is so much opportunity for value-added businesses in Montana, she said, adding that she is always looking for more opportunities for that.

The second theme is fostering opportunity, whether it's economic or it's getting government out of the way because there's too much red tape on something, she said.

She said one of her bills removed a ton of red tape for a certain class of businesses in Montana.

The third topic Montanans want her to work on, she said, is protecting the outdoor heritage.

"We all love to fish, hunt, hike and do whatever we want to do outdoors whether it's gathering for a political gathering in park - that's been my career is balancing the needs of our economy, our communities, our growth with the help of our outdoor heritage, so I've brought people together on very thorny issues, very diverse folks, people on all political stripes and brought them together, and together we've found win-win solutions to really, really difficult issues," Williams said. "... I love to practice the art and the skill of finding common interests in really unique places.

"Washington is so polarized and everyone goes into their political corners - their partisan corners, fights with each other and it's all about whether you win or whether you can get to the next rim on the political ladder. It's not about getting the job done of Montana," she added. "And that's what we need - we need someone to go there and do the work, and work with people of all political stripes to get results."

She said contrasts between her and her opponent ares not coming out in the advertising.

One of the differences is health care, she said, adding that Rosendale wants to repeal the Affordable Care Act.

In a pandemic, she said, her opponent took campaign contributions from companies that promote these short-term insurance plans.

His suggestion for people in a pandemic was to buy those short-term insurance plans that he would not say he would buy for his own family, and they don't have to cover COVID testing and treatment, she said.

Another contrast between them was a human trafficking bill that is now enacted to strengthen the anti-trafficking laws, she said.

She said he was one of seven senators against it and she voted for it.

"That bill was signed into law and it is allowing us to rescue including children from human tracking, which is basically slavely, it is modern slavery," Williams said.

Public lands also is a difference between the two, she added.

She said when he ran for office in 2016 one of his priorities was to transfer public lands.

"I have been a champion for our outdoor heritage and our public lands for 26 years, and he wanted to transfer them," Williams said. "... I guess if you're from Maryland there's not a lot of public land there, so I'm glad he's learned. But we need people that aren't going to be learning on the job. We need people that are grounded in Montana's hopes, struggles and dreams and our values, and what we love. I would never suggest transferring our public lands and I've fought against any proposal to do that."

Her father was a lieutenant-colonel in World War II and her husband was a Vietnam War-era veteran, she said.

"I'm so respectful and indebted to our veterans and our service members and their families for the sacrifices they made, for the role they've had in my life and I've always voted for policies that support our veterans," Williams said.

In an interview after the event, Williams said she's been hearing a lot from the people of Montana on her tour.

"The Solutions Tour is all about bringing solutions back to Montana and cutting through the hyper-partisanship, being grounded in what Montanans want and need and being that true independent voice for all Montana not just for special interests - that's how you get solutions and I've done it before, and I'm ready to do it again," she said.