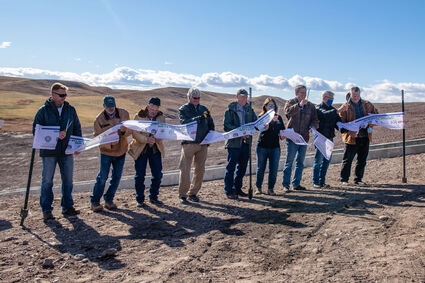 Officials cut the ribbon Thursday to celebrate the completion of repairs on the St. Mary Diversion and Conveyance works.

ST. MARY DIVERSION - Local, state, tribal and federal partners along with Montana's congressional delegation gathered together Thursday at Drop 5 on the St. Mary Diversion and Conveyance Works to celebrate the completion of fixing structures after catastrophic failure earlier this year.

"I got the privilege of being the project engineer on this job, and it's a once-in-a-lifetime shot to come across a project like this," HDR Engineering Project Engineer Stan Schweissing said. "Somewhere back around 1922, a bunch of people finished this for the first time and they put together the bottom of Drop 5 using wooden piles underneath the bottom of that structure that we found when we dug the bottom of the structure of the old trash structure and put the new one in.

"We had to cut some of those piles off at the very bottom in - they are still in down there holding up this project right now," he added. "Their work lasted a long time. I expect this project to last a long time too."

U.S. Bureau of Reclamation Commissioner Brenda Burman said this project that has been worked over the summer is an example to the nation of what they can do when they work together.

"It is truly incredible," she said.

The final concrete drop structure in the century-old 29-mile-long St. Mary Diversion and Conveyance Works that provides much of the water in the Milk River each year collapsed May 17, after decades of Milk River water users warning that would happen and major rehabilitation of the system, one of the first the U.S. Bureau of Reclamation was approved to construct when the bureau was created in 1903.

The system, that transfers water from the St. Mary River into the Milk River, had been shut down until repairs were completed ealrier this month.

Milk River Joint Board of Control Project Manager Jennifer Patrick said Schweissing was the brain behind this project and out on site.

"There was a lot of good and bad frustrations, methods and means, conversations - there was a lot of things that happened up here," she said. "We're proud of you Stan, so thank you and HDR for being a partner on this project with us."

"I had no idea what we're getting into - it was a total team effort - HDR, Bureau of Rec, Milk River Joint Board - had a great time doing this," he said. "It was frustrating at times, but we got 'er done, I'd love to do another job with you guys, maybe on some different circumstances, but really appreciate the teamwork with these projects. It's not just one entity, one company, it's a whole team and I think it turned out really well."

Under the original authorization at the start of the last century, most of the funding for the diversion and The Milk River Project comes from users, primarily the irrigators, who now pay for about 75 percent of the costs with the federal government picking up about 25 percent.

A study to determine the users ability to pay, which could reduce the amount the users have to pay, has been requested.

All three members of the delegation were at the ribbon cutting Thursday.

He said this project on these drops is a warning, it's warning to everybody that says "we got to get this thing rebuilt from beginning to end."

Daines echoed Tester in congratulating all the people who have worked on this project.

"Congratulations to so many of you and thank God we had a break in the weather, hardly lost a day because of weather, but it is a glorious sight to see this behind us, and it is truly a testimony in these incredibly polarized times we live in today, in America politics," Daines said. "We came together - it was Democrats and Republicans working together, we have the entire delegation here from Montana. It's a big state to think that everybody's here I think is a testimony and the support you all have and how important this project is for Montana and our Hi-Line communities."

Gianforte said the St. Mary's Diversion Milk River project is the No.1 infrastructure project here in the state because of its importance to the communities along the Hi-Line, for the irrigators, for the tribal government and more.

"It's really been the collaboration that has been so remarkable that we had the leaders from the Blackfeet Tribe and Fort Belknap providing access and support and labor to get this done," he said. "The federal government, the Bureau of Reclamation just removing barriers so we can get this progressing, Customs and Border Control as mentioned built with Canadian concrete that would've just been too difficult to get from anywhere else, the Sletten Construction - I just want to say thanks to all the folks that worked so hard over these 22 weeks to create a miracle so that we could be here (Thursday) listening to water flowing into the Milk River once again."

He added that they need to continue to get the cost-share fixed and he'll continue to work with Daines and Tester in the remaining time they have in Washington, D.C.

Lt. Gov. Mike Cooney, who is also the St. Mary Rehabilitation Working Group Co-Chair said it's great to come together as they re-open the two key pieces of the St. Mary Canal.

"From the time I was in the state Senate and to (Thursday) as a co-chair in the St. Mary Rehabilitation Working Group, I've supported efforts to replace the St. Mary's Diversion system," he said. "While it took a catastrophic failure and the loss of part of the irrigation season to trigger this investment, I am pleased we are making the effort to repair this critical water supply to complete the project in time to shore up water supplies for the winter and be prepared for the irrigation season next year."

The St. Mary Diversion system is critical to agriculture, communities and businesses all in the basin, he said.

Blackfeet Tribe representative Gerald Lunak said when one gets a Blackfeet on a job, they do a good job.

"We expect that, as the project moves forward, we'll continue to have our own people engaged and doing the good work you see here," he said. "On behalf of our tribal leadership and our tribal membership, we want to congratulate our boys and the folks that worked on this. ... We know in 1903, this was built, we expect that some of our own people we're also on that job and so in a way of speaking the grandsons of those men are basically here repairing this job on behalf of the basin, for the best interest of the basin."

Fort Belknap Indian Community representative Kristal Fox said she was amazed by how fast this project got done.

"When this happened, I start thinking about how we take water for granted," she said. "I was really scared we'd have to go on a water ration and I tried to do my part of shorter showers, less laundry, less dishwater - I really tried to do my part and I hope that for all of us this a good lesson on not to take water for granted and I think we really need to start looking toward conserving every drop and not take it for granted.

"We have to start catching up with the rest of the world and be conservative," she added. "... We are behind the times, folks. We are greedy. We need to stop being greedy and start taking advantage of every drop of water we can, so that everyone doesn't have to go without."

Bureau of Reclamation Regional Director Brent Esplin said his first involvement in the Milk River project was in 1996.