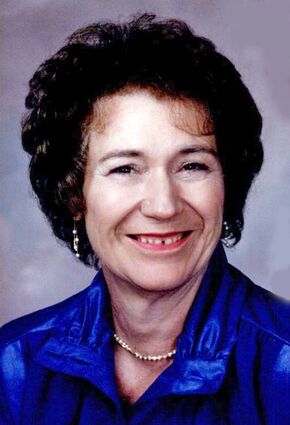 Cremation has taken place, and due to the pandemic, memorial services will be held next year.

Pauline's family has suggested memorial donations be made in her memory to First Presbyterian Church, the Montana Order of the Eastern Stars, Hill County 4-H, or the charity of the donor's choice.

Please visit Pauline's online memorial page and leave a message of condolence for her family at http://www.hollandbonine.com.

Pauline was born March 21, 1931, in Conrad to Walter and Nina (Yeager) Hammermeister. She attended schools in Conrad, and, after graduation, went on to attend college for a year.

October 22, 1950, Pauline married Merle W. Petersen, and the couple had four children. They farmed in partnership with his brother and sister-in-law on the family farm east of Brady until Pauline and Merle purchased a farm in the South Fresno area in 1961, which is where they finished raising their children. Merle passed away in 1996, and Pauline moved to Havre in 1998.

Pauline was a hard-working woman, who cared lovingly for her home and family. She was very involved in the Brady, Kremlin and Havre communities. While farming and in Havre, Pauline was a long-time 4-H Leader, a member of the First Presbyterian Church, Order of the Eastern Star, the Montana Farmers Union and as a precinct committeewoman in the Democratic Party.

She was preceded in death by her husband, Merle Petersen; granddaughter, Jamee Vaughn; parents; and brothers, Lewis and Walter Hammermeister.