Havre will face Glendive in Eastern A consolation match Thursday 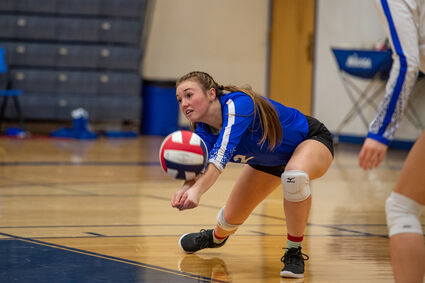 Sydney Wilting and the Havre High volleyball team lost at Billings Central in the Eastern A semifinals Tuesday night in Billings. The Blue Ponies play a third-place match against Glendive on Thursday night.

The Havre Blue Pony volleyball team had a short turnaround in the new Eastern A playoffs. And, as tough as they played, the Ponies came up short in Billings.

One night after clincing a Class A state tournament berth with a win over Laurel at home, Havre traveled to Billings to play the Billings Central Rams in an Eastern A semifinal. But, it was the Rams who came away with a 3-1 win.

Central dominated the first set with a 25-13 victory, and while Havre charged back in the second, Central was still able to stay ahead 25-20. Havre did respond with a well-played third set in which the Ponies...