Havre relishing another chance at state 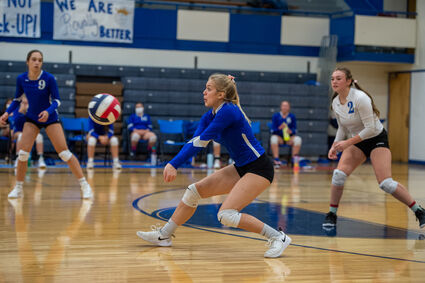 Havre High's Kennedy Hampton digs up a ball during an Eastern A volleyball match earlier this fall in Havre. The Blue Ponies placed fourth in last week's Eastern A playoffs, earning their second consecutive trip to the Class A state tournament, which runs Thursday through Saturday in Sidney. Havre opens the tournament against Western A champion Columbia Falls.

2020 has brought about a crazy fall sports season, but with teams sticking together and making a great effort, the 2020 Class A State Tournament will be kicking off this week, where the Havre High volleyball team will be back in the battle for the state championship.

The Blue Ponies (10-6), the No. 4 seed from the Eastern A will be in for another tough bout to start off the tourney, as they will be going up against the No. 1 Columbia Falls Wildcats from the Western A Thursday at 10 a.m. at Sidney High School in Sidney. Once again, it is a David versus Goliath situation for HHS.