On the court, or in class, senior Talia Ralph kills it for the Blue Ponies 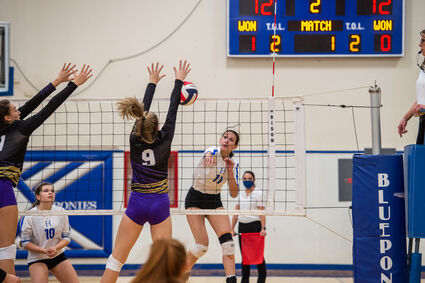 Havre High's Talia Ralph, right, smashes a ball past a Laurel defender during an Eastern A playoff match last week at the HHS gymnasium. That match was Ralph's last at home, but she and the Blue Ponies are far from finished as they play at the Class A state tournament today through Saturday in Sidney. Ralph has been an offensive leader for the Blue Ponies all season.

Offense is crucial in any sport. When an individual or team's offense is performing at a high level, it is felt within the atmosphere in the room, especially in a team sport, where a player can amp up their teammates and put on a show alongside them.

When it comes to offense and the Havre High volleyball team, senior Talia Ralph is one of those leaders.

Ralph has been on the court playing volleyball for seven years, with four of those years as a part of the Blue Ponies. The senior has made quite the impression in her time with HHS, becoming one of the most lethal offensive players in Cla...