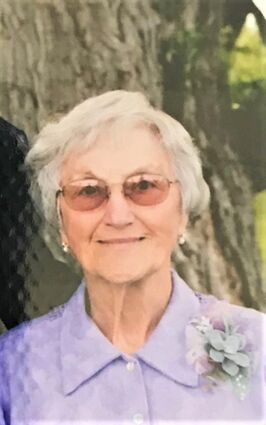 Irene Emma (Sondag) Wagner, 88, passed away Sunday, November 8, 2020, due to natural causes at the Care and Comfort Home in Havre.

She was escorted into heaven by her younger sister who passed away on the same day three years earlier.

Cremation has taken place, and due to the pandemic, services will be held when it is safe to gather.

Irene's family has suggested memorial donations be made in her memory to St. Jude Thaddeus Catholic Church, PO Box 407, Havre, MT 59501, the Alzheimer's Association-Montana, 3010 11th Ave N, Billings, MT 59101, or a charity of the donor's choice.

Please visit Irene's online memorial page and leave a message of condolence for her family at http://www.hollandbonine.com .

Irene was born February 19, 1932, in Sykeston, ND, to Magnus and Catherine (Hammes) Sondag, the oldest of seven children. She was raised in and around Sykeston, with the exception of a nearly two-year family move to Richmond Beach, WA, where here parents worked for the Standard Oil Co. during the war effort in 1944-45, then returning to Sykeston and graduating from high school there.

After high school, Irene worked for a bank in Carrington, ND. She married William P. "Bill" Wagner, and the couple moved to Havre in 1954, where they had their four children. After her children were all in school, Irene began working at Koefod Insurance Agency as a secretary, moving up to work as an insurance agent until her retirement in 1999. She and Bill were married for 53 years at the time of his death in 2003.

Irene's children and grandchildren were the joy of her life. She loved their visits, playing games, their playful back-and-forth banter, and she was always up to date with their school and sport activities. She enjoyed painting, tending to her flowers and her garden, family gatherings, and trips to the family cabin. Irene was even known to sneak down to the casino to throw in $5 and press her luck. She was a very good card player and bowler, and enjoyed many years in the bowling league. She also played city league volleyball and slow pitch softball for many years.

She baked legendary Christmas cookies, although she would never admit it. She also had a beautiful voice and enjoyed singing with the siblings as a kid and as an adult. One of her all-time favorites was when her grandsons played "You Are My Sunshine." She would light up and sing along as she knew every word!

Irene's laugh was infectious and she was always genuinely interested in how others were doing. She possessed a strong faith foundation and was rarely absent from her favorite pew at church. She loved to share fond memories of her childhood, and she would light up when she talked about how "Bill would pick everyone up to go for a cruise (because he was the only one with a car), and he always took me home last. I think it's because he liked me."