Experienced Longhorns on the verge 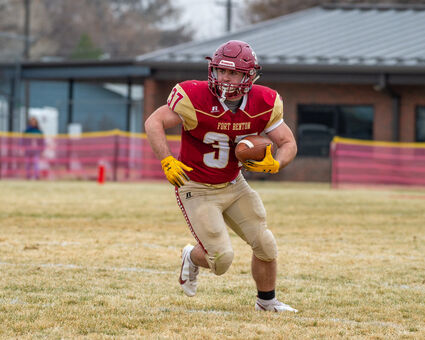 Fort Benton's Hayden Axtman carries the ball during a Class C quarterfinal game last Saturday in Fort Benton. Axtman and the Longhorns have been playing together for years, and in all sports, too. Now, they stand one win away from getting to play for a 8-Man state championship.

They've been here before. In fact, it was just one year ago that the Fort Benton Longhorns stood on the doorstep of getting to play for a Class C 8-Man state championship.

That semifinal game last November against eventual state champion Faiview didn't go Fort Benton's way, but now, the Longhorns are a year older, a year bigger, a year strong, and perhaps, even hungrier.

And that's what unbeaten Fort Benton will lean on Saturday when the top-ranked Longhorns (8-0) host No. 2 Flint-Creek (Drummond-Phillipsburgh) in the 8-man semifinals.

"The kids are jacked up for this game," Fort Benton...