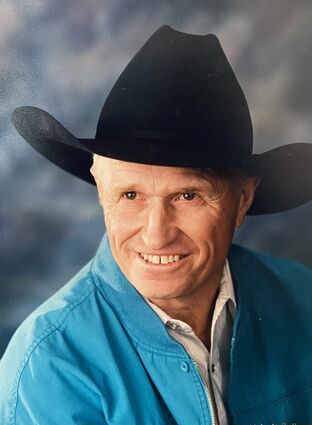 Connie was born on March 21, 1933, in Havre, Montana. The first child of Art and Bertha (Sargent) Cox, he was raised on the family ranch 42 miles north of Havre near Wildhorse Lake next to the Canadian Border.

Throughout two decades of rodeo competition in the United States and Canada, Connie acquired a long list of great friends. He always liked to bring people together. For 20 years he held an annual Team Roping clinic at his ranch on Frenchman Creek north of Whitewater, near the Canadian border. The past 17 years, he hosted a Cowboy Reunion in Havre for his friends in the Bear Paws and from around the state and Canada. Everyone who attended looked forward to an enjoyable evening of food, drinks, stories and dancing, which Connie loved to see.

In addition, for 23 years Connie and his daughter Charlene hosted a fun tour group for people to attend the National Finals Rodeo in Las Vegas, NV. The bus was always full of people who laughed themselves silly and could not wait to go back the next year.

Connie was a real cowboy. He never believed in using four-wheelers to round up and trail cattle. When horse trailers pulled up, only to see four-wheelers being unloaded instead of horses, he would say "Boys you will never get a good horse broke that way." Notably, Connie initially was never a fan of the cell phone, but it eventually became his best friend!

Connie was instrumental in seeing that the Great Montana Centennial Cattle Drive of 1989 became a reality. August 11, 1989, he and a handful of drovers began trailing over 100 head of longhorns from his ZN Ranch on Frenchman Creek to Roundup, MT. There they met up with other participants and more longhorn cattle, totaling over 2,800 head. The cattle drive continued to Billings where the event concluded. September 9, 1989, an incredible parade took place with thousands of people lining the streets. Many still talk about it today.

Connie kept a daily diary during the cattle drive and his diary was eventually published in a book titled "Epic Trails." Years later, a tribute book about Connie was written by David Horsey and was aptly named "Connie, Lessons from a Life in the Saddle."

In the spring of 1994 Connie and a friend, Penny Nicholls, formed a partnership and created Epic Trails Cattle Drives. They hosted many guests from around the world for many years, some coming as far as Spain, Germany and France.

Their days were spent in the saddle working cattle on various ranches. From atop his horse he would overlook the countryside and say, "God's Creation is my Cathedral." He loved that life until the end. One week before his death he was proud to hear that his niece, Crystal Kinsella, had come home and borrowed his horse "Bear" to gather cattle off Beaver Creek Park, taking one last ride for Connie.

Most of all, Connie was so proud of his children and grandchildren's superb athletic abilities in team roping, barrel racing and basketball. His son Casey was a qualifier to the National Finals Rodeo in Team Roping and although not a big fan of basketball, he loved to watch his granddaughters Calli, Macey and Kaylee Jo play.

Connie married Margie Sivertsen June 1, 1957. Together they ranched and had two sons, Casey and Clinton, and a daughter, Charlene. Their marriage ended in divorce.

May 31, 1997 Connie married Linda Kallenberger Nystrom. Connie and Linda enjoyed many adventures together. Linda lovingly cared for Connie for the past several years as he battled ALS - Lou Gehrig's Disease - at their home in the Bear Paw Mountains south of Havre. Connie also had wonderful hospice caregivers, Sharon, Lauren, Jory, Reese, Pam and Jessica. They gave him the most compassionate care and attention.

Connie was preceded in death by his parents and his brother Larry.

Recalled by his Aunt Rowena Sargent, "Cowboys are a romantic lot and Connie was the best."

There will be a celebration of life for Connie in the Spring. Until then, as Connie always said, "Don't forget to check your cinch."

Memorials can be sent to: