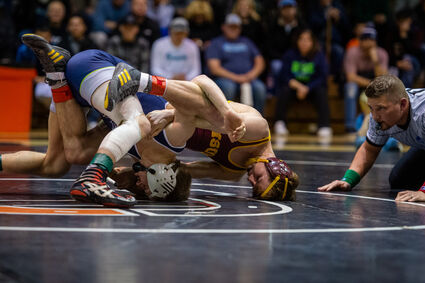 Montana State University-Northern's Nick Kunz, right, is the defending NAIA national champion at 125 pounds and is ranked No. 1 according to the NAIA Preseason Coaches Poll released last Friday.

The Montana State University-Northern Lights, of longtime head coach Tyson Thivierge, know they have a really good team this wrestling season - whenever that season begins.

Now it's obvious the coaches in the NAIA think so, too.

The Lights will also start the season with two top-ranked grapplers, and five grapplers rank...