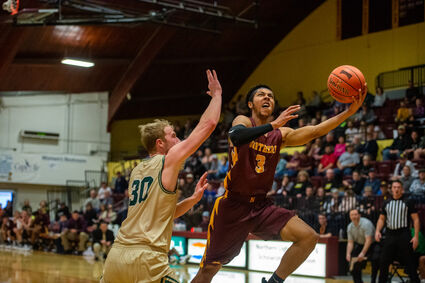 The Montana State University-Northern men's and women's basketball teams were supposed to open Frontier Conference play at Rocky Mountain College this weekend, but those games have been postponed.

Now however, gyms all over the Frontier will be silent.

Northern announced Thursday that its games at Rocky Mountain College have been postponed due to COVID-19 issues. That means, for the MSU-N men, it's the second straight weekend in which games have been called off because of the pandemic. The Northern women on the other hand, did play a pair of non-conference games against Lewis-Clark State and Valley City State last weekend in Helena, so, they do have something under their belt. Still, it's a disappointing scenario for the Lights and Skylights, who were set to play Rocky Saturday night and Sunday afternoon, as part of the new league schedule.

Of course, Northern and Rocky aren't the only ones dealing with the COVID difficulties.

Montana Tech's men suspended their season for 14 days earlier this week due to COVID-19, which forced the postponement of this weekend's games against Carroll College. And the Carroll women had to cancel a game at Oregon State earlier this week because of a positive in the Fighting Saint's program, which in turn forced the postponement of the women's games between the Saints at Orediggers this weekend.

Montana Western did play games this past week, but because of the positive tests at Tech, Western will not be able to play the Orediggers in Frontier games scheduled for Dec. 12-13, on at least the men's side as of now. That weekend, Carroll is slated to play Rocky, as well, but those games could be in jeopardy.

Then there's the University of Providence, which isn't even participating in sports until after the new year. As a university Providence was the only college in Montana that opted to stay with full-time remote learning for the fall of 2020. Therefore, UP did not participate in any NAIA fall sports, and has no winter sports, scheduled until January.

Now it looks as though January will be the beginning of Frontier Conference basketball, unless the league uses the final week of December to make up the games lost in the first two weeks. That is an option that the league is likely discussing during a meeting that's taking place today.

Northern is supposed to host LC State in non-conference games next weekend, and then not resume basketball until home games against Carroll College Jan. 4-5.

January is also a big month for other Northern sports including wrestling, and the MSU-N volleyball team, which had its season moved from the fall to the spring semester. The Skylights, and the rest of the Frontier Conference are supposed to begin the delayed season Jan. 29-30. Northern is set to host Montana Western that weekend. Then, less than a month later, Northern and the Frontier Conference are supposed to begin a spring football season. The Lights' season-opener is slated for Feb. 27 at College of Idaho.

For now, though, things will be eerily quiet on the Frontier sports front, as all league basketball games which were set to take place this weekend are now on hold, which, unfortunately, doesn't make the league any different than the COVID issues that so many college sports around the country are currently grappling with.