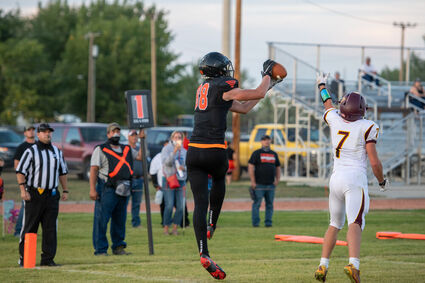 Chinook senior Reese Elliot hauls in a pass during a 2020 Class C game against Shelby in Chinook back in September. Elliot signed with the Montana State University-Northern Lights and head coach Andrew Rolin Tuesday.

The Montana State University-Northern football team is getting closer to starting preparations for a Frontier Conference spring football season. But, the Lights, of head coach Andrew Rolin, also continue to prepare for the long-term future, and that's what Rolin has done with his newest recruit.

Tuesday, Rolin announced that Chinook tight end Reese Elliot has signed to play for the Lights starting next fall.

Elliot, at 6-8, is a physical specimen and will certainly be the prototype tight end the Lights are looking for, as he also weighs in at 230 pounds.

In each of the last two seasons,...