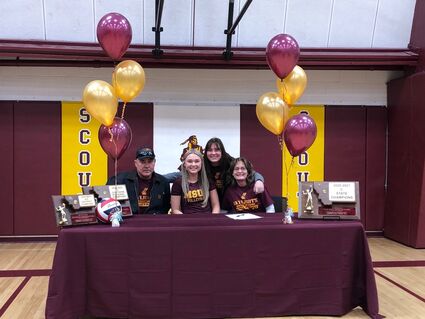 Bridger's Emily Adkins, middle, celebrates with her family after signing with the Montana State University-Northern Skylights this week.

It's never too early to build for the future. And Montana State University-Northern head volleyball coach Jerry Wagner keeps doing that.

And he says he's fired up about his latest signee, Emily Adkins from Bridger. Adkins is a 5-11 setter/outside hitter who signed with the Skylights earlier this week.

"First off, with everything that was going on this year, I was able to see a few high school matches, and I got to see Bridger play some of the best matches I've ever seen in person," Wagner said. "I watched them play Joilet, who won the state B championship, and Manhatten Christian, and the...