New schedule, no LC State, but the women's field is still loaded 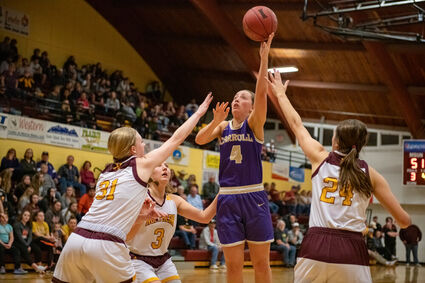 Former Havre Blue Pony great Dani Wagner, middle, shoots over the Montana State University-Northern defense during a Skylight's game against Carroll College last February in the Armory Gymnasium. Wagner, now a senior, is part of a deep and talented Carroll team picked to win the Frontier Conference this season, while the Skylights are picked third. Northern and Carroll are set to face off Monday and Tuesday in Havre.

Frontier Conference women's basketball is always really good. There's always multiple teams ranked in the NAIA Top 25, and almost any team in the league in a given year would be good enough to make it to the NAIA national tournament.

This coming season will be more of the same, too. Yes, the Frontier will be loaded yet again, but, it will also be much different.

Lewis-Clark State has moved on to the Cascade Conference, so, that changes the schedule - a schedule that harkens back to the old days when teams played each other Ron back-to-back nights. The league also likely won't have has man...