Frontier Notebook: Scoring is up in the fast-paced Frontier 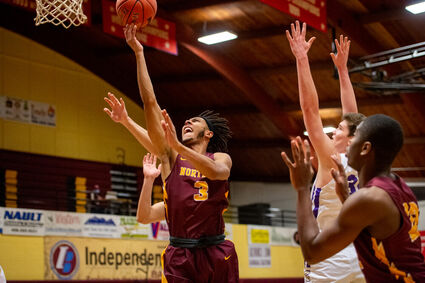 Montana State University-Northern's David Harris scores during a Frontier Conference game against Carroll College last week in Havre. Harris is averaging nearly 18 points per game which is second in the league. The Lights and Skylights host Montana Tech this weekend.

One week down. For the first time since Frontier Conference play began, every game on the men's and women's basketball slates were played. For at least one week, COVID-19 wasn't the story,

Instead, the story, in Frontier basketball after a full week is, nothing much has changed. In other words, the Frontier is deep, and everybody is good.

On the men's side last week, Providence won four games, and that's without having played a single game leading up to last Monday. So it's obvious, the Argos are as advertised. But, Montana Tech is showing its no fluke either, and Montana Western won twic...