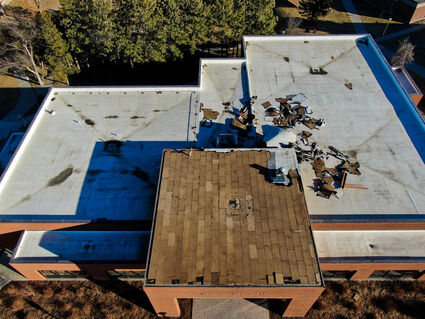 Damage to the roof of Montana State University-Northern's Vande Bogart Library done during Wednesday's windstorm is displayed in this overhead photograph.

Montana State University-Northern issued a release giving an update on the roof of its Vande Bogart Library.

The roof was damaged by high winds during the windstorm Wednesday, a storm that stretched from the Pacific Coast into Montana and caused serious damage in multiple communities in the state and widespread power outages.

Havre had sustained winds in the 50-mph-range and gusts up to 78 mph Wednesday.

"We are still assessing the extent and cost of the damage," the release said.

No one was in the building or hurt when the waterproof membrane and some perimeter framing blew off due to extreme wind gusts, the release said. Mechanical fasteners appear to have failed which made it possible for the wind to get under the membrane and peel it off.

The release said it appears that some damage was dome to the chiller system of the library but the heating system located in the attic loft appears to be undamaged. The damaged roof is the original roof put on the building, which was dedicated in 1982, 39 years ago.

The release said the roof appears to be structurally sound and was assessed by an architect from the AE Division Thursday morning.

"We are installing a temporary covering to make that portion of the roof waterproof, safe and operational again as quickly as possible," the release said.