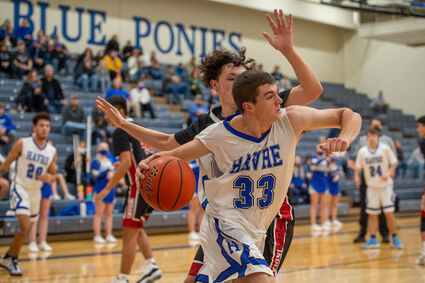 Havre's Caden Jenkins, left, tries to go baseline during Thursday night's Class A game between the Blue Ponies and Browning Indians at the HHS gymnasium. Browning overtook Havre in the final seconds to win 62-61. For more photos, go to www.havredailynews.com.

The Havre High boys lost a heartbreaker last Saturday night in Hardin. So, the Blue Ponies were hoping being back in the HHS gymnasium would cure that heartache.

Instead, Browning inflicted more pain on the Blue Ponies.

Trailing by four points with 2:55 left, and down a pair with :39 left, Browning stole a win in Havre with a wild finish as the Indians hit a bucket to pull within one with :34 left, then stole a Havre inbounds pass for another score seconds later to go up 62-61 with :15 left in the game. Havre had a chance to win the game on the last possession, but it was not to be, as Browning upset the Ponies.

"This was another good learning experience for us," HHS head coach Walynn Burgess said. "Gotta give it up to Browning, they came in here and played their butts off from buzzer to buzzer. We just have to learn how to close out games. I was proud of our effort leading up to the final minutes."

Havre played well in a tough game right up to those final minutes.

Josh Warp hit an early three to get Havre off and running, but Browning put up a 9-2 run to tie the game at 13-13 after eight minutes. Browning would then surge ahead by as many as six points in the second stanza, but the hot 3-point shooting of Caden Jenkins, and the inside play of Kellen Detrick helped the ponies come racing back to lead 41-37 at the break, and when Warp drilled another trey to open the third, Havre had rattled off 10 unanswered points. Browning had answers in the third quarter, but a three by Josh Currie and a big shot in the lane from Jenkins helped Havre finish the stanza with a flurry, and lead 46-39.

The fun, however, was just getting started.

The Ponies would lead by as many as eight points early in the fourth quarter, but Browning kept on battling, and the Indians clawed all the way back to 52-52 with 3:23 to go. Detrick and Max Olson responded with back-to-back scores to put Havre back up by four, but five straight points by the Indians would see them go ahead 58-56 with :59 left.

Havre was far from done, though. Olson scored quickly, then Warp forced a turnover, and on the ensuing possession, he got open in the corner for a huge triple that put Havre up 61-59, before Browning's wild finish.

Detrick led three Ponies in double figures with 19 points, while Jenkins had a season-high 16 including three bombs. Warp scored 13 and hit three three's as well, while Joseph Bullshow scored 16 for Browning, which won its first game of the season.

Meanwhile, the Ponies fell to 2-2 overall with the tough loss, but they're still 2-0 in conference play, and they return to Northeast A action today when they head all the way to Sidney.

"I have no doubt we will learn from this and be better from it," Burgess said. "Now it's time to regroup and get ready for the Sidney eagles tomorrow afternoon."

Havre and Sidney will meet today at 5 p.m. in Sidney.

Pony girls win on the road

The Havre High girls also played Browning Thursday night, but HHS was one the road, and the Ponies came away with a 49-37 win against the previously unbeaten Indians.

No stats were reported from Thursday night's game in Browning, but the Ponies improved to 3-1 on the season, and the win was a good bounce back for Havre, which lost a tough one to Hardin last Saturday.

Now HHS, of longtime head coach Dustin Kraske, will return to the Blue Pony Corral to take on Sidney. The Eagles are 1-3 overall this season, and 0-2 in the Northeast A.

Havre and Sidney will meet tonight at 5 inside the HHS gymnasium. 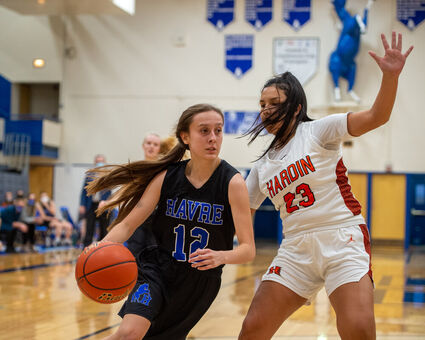 Kyle Walker, left, drives by a Hardin defender during an Eastern A game last weekend in Havre. Walker and the Havre High girls won on the road in Browning Thursday night. Now, the Blue Ponies return to Havre to host Sidney in a Northeast A game tonight at 5 in the HHS gymnasium.