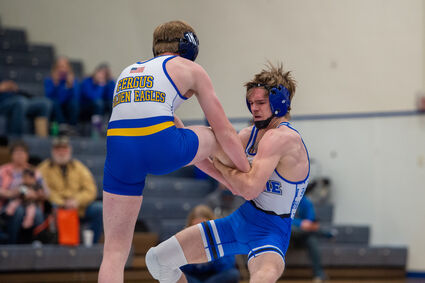 Havre High's Dominic Perkins, right, battles a Lewistown foe during Saturday's Eastern A dual in the HHS gymnasium. The Blue Ponies lost to the Eagles in their home debut, but they'll be right back at home this Friday and Saturday.

The Havre High wrestling team was certainly fired up for its first home dual of the belated 2021 season. But, their opponent was equally hyped.

Saturday morning, Havre went head-to-head with Eastern A rival Lewistown for the first time this season, and while things were tight for much of the match, the Eagles would end up pulling away for a 41-27 win inside the HHS gymnasium.

And while the final team score turned out to be a bit lopsided in Lewistown's favor, the day was much closer than it looked.