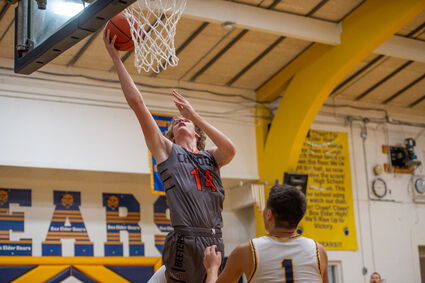 Chinook's Reese Elliot lays up a shot during a District 9C game last week in Box Elder. The Sugarbeeters are undefeated so far this winter.

Chinook and Box Elder started the busy week in 9C basketball with a game Tuesday night. And Chinook continued its early-season dominance with a 84-46 win over the host Bears. Isaac Bell poured in 34 points and Reese Elliot scored 22 for the Beeters.

Tuesday night also saw the Hays-Lodge Pole Thunderbirds step out of conference to take on Roy-Winifred, and the Outlaws were too much in a 79-39 win. They outscored HLP 51-21 in the first half, and the game was out of reach. Tyshawn Shambo did score a game-high 21 points for HLP in the loss.

In Class B action Tuesday night, Rocky Boy bounced back from last week's tough loss to Fairfield with a 66-57 win over Great Falls Central. The Stars opened the game on a 23-8 lead, and while GFCC stormed back, Rocky Boy had enough in the tank to hold the Mustangs off down the stretch. Joe Demontiney led for the Stars in double figures with 17 points. Nacona Limberhand added 16, Sean Gibson had 13 and Ben Crebs scored 12 for the Stars.

Rocky Boy also edged Conrad Thursday night 59-54 in a District 1B battle. The game was close throughout, but the Stars went on a 15-10 run to close the game. Joe Demontiney scored 20 points in the victory for the Stars.

Harlem was also victorious Thursday night, as the Wildcats blew out rival Glasgow, 72-52. In the 2B win, R.J. Ramone poured in a season-high 39 points while Tyler Cichosz added 10.

Thursday's local action started with a huge Northern C showdown between Fort Benton and Roy-Winifred. But is was the Outlaws who prevailed, 49-38. Fort Benton led 13-6 after one, but the Longhorns got outscored 29-22 in the final 16 minutes. Hayden Diekhans scored 17 points and Cody Evans added 10 in the loss.

There was a full slate of District 9C boys action on tap Friday night, including the undefeated Chinook Sugarbeeters, who clobbered the Chester-Joplin-Inverness Hawks, 73-22. Chinook scored 50 points in the first half, and got 28 points from senior Ethan Bell. Blake Harmon led the Hawks in scoring with seven points.

Friday night also saw Fort Benton bounce back from its non-conference loss to the Outlaws on Thursday night, by besting Turner 58-14. The Longhorns started the game on a 23-4 run and would never look back.

Hayden Diekhans poured in a game-high 20 points for the Longhorns, while Devin Bird added 11. Turner was led by Shane Kimmel's seven points.

North Star picked up an important 9C win Friday night, topping Hays-Lodge Pole 69-59. The game was a tight battle throughout the first half. The Knights did go on a 23-14 run in the third to pull away, but, the T-Birds put up a strong fight in the final eight minutes.

Gavin Spicher was on fire for the Knights, with 29 points, while Rhett Wolery added 18. HLP got 19 points from Daniel Henry and 15 by Tyshawn Shambo in the loss.

In Class B Friday night, the Rocky Boy Stars kept on winning, as they crushed the Choteau Bulldogs, 69-22, behind a 44-15 run in the first half. Sean Gibson and Ben Crebs each scored 17 points for the Stars, who went 3-0 on the week.

Box Elder has been on a roll of late, and that continued Friday night as the Bears took down Big Sandy in an exigent 9C game, 64-57. The game looked like it was headed down to the wore, but the Bears used a 21-9 run in the fourth quarter to close things out.

Tayce St. Pierre scored 19 points, while Gabe Saddler had 12 for the Bears. Layne Demontiney had a strong outing for Big Sandy with 17 points, while Cooper Taylor added 15. 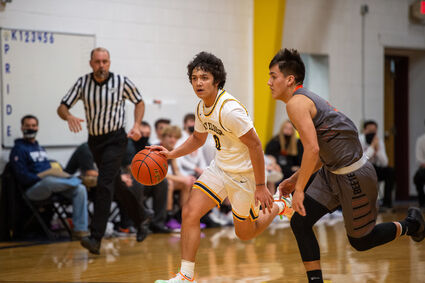 Every game in the 9C this season will be big, and that was the case Saturday night when Big Sandy edged North Star 52-35. The two rivals were tied at the half, and North Star led going into the fourth, but the Pioneers finished on a 25-10 run. Kody Strutz led a balanced Big Sandy attack with 11 points. The trio of Gavin Spicher, Rhett Wolery and Jaden Sargent each scored 12 points for the Knights.

Meanwhile, Box Elder was no match for Fort Benton Saturday night, as the Longhorns ran away from the Bears, 62-36. Fort Benton's depth was big as 11 Longhorns scored, led by Jace Thompson's 11 and Billy Ullery's 10 points. Tyrus LaMere scored a game-high 21 for the Bears.

Turner was also no match for the powerful Chinook Sugarbeeters. On the road, the Beeters ran past the Tornadoes, 80-30. Chinook started the game on a 27-6 run, and got 26 points from Ethan Bell. Shane Kimmel led Turner with 14 points, while Austin Welch chipped in with 13.