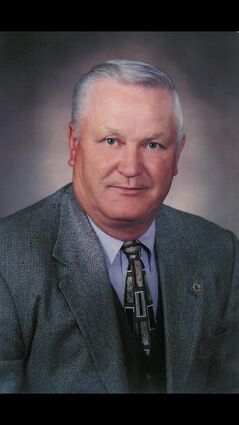 Clarence M. "Fritz" Keller, 76, passed away from injuries he received from an accident on the farm Tuesday, January 19, 2021.

A Rosary and a funeral Mass will be held for immediate family at St. Jude Catholic Church. His burial will be held at the Cottonwood Cemetery North of Havre.

If you would like to watch the live video stream using your computer or mobile device, please use this link:

Fritz always said that he would prefer contributions be made to his memorial rather than put towards flowers for his service. Therefore, memorial contributions in Fritz's honor may be made to St. Jude Church or to a memorial of one's choice.

You may visit Fritz's online memorial page to leave a message of condolence for his family at http://www.hollandbonine.com .

Fritz was born January 22, 1944, in Havre, Montana to William and Juletta (Garding) Keller. He was one of the 16 children born and his placement was in about the middle. He was raised in the Cottonwood area north of Havre on the family farm and attended St. John's Catholic Church. He attended country school until the sixth grade and for his seventh and eighth grade years he attended St. Jude and then on to Havre Central High School, where he graduated in 1963.

After graduation he went to work for Fleet Wholesale for 10 years. He began farming on the side. So he and LeRoy would work till midnight plowing fields, then sleep for a bit, get up at dawn to fertilize until Fritz had to go to town to work. Then they would do it all over again.

June 26, 1967, Fritz married Nayda Pocha in Havre. They raised six children together, Kristi, Tracy, Kimbi, Michelle, Randy, and Kelly. He loved his role as a husband and father to the kids. The couple later divorced, however remained life-long friends.

In 1993, Fritz lost his leg in a farming accident. He was flown out to Seattle where they had to amputate his right leg. Fritz was a determined soul who would never let this stop him from doing what he loved and that was farming. Many who met Fritz just thought he had a limp, they didn't realize that he had a prosthesis.

Fritz was a community-minded person, it was his life. He believed in giving back to your community because that is what makes it better. Fritz served on many boards and volunteered his efforts and time because of his belief in community. A few of the boards he served on were the Harvest States Board; Havre Day Activity Center Board for over 35 years; the Knights of Columbus 1644 for over 50 years - 30 of those years serving as financial secretary - including membership of the Knights of Columbus 4th degree Assembly 1553; The Hill County Electric Board for over 42 years; the Cenex Board; the Central Montana Co-Op; the NRCA board for over 20 years; and also served on the St. Jude and the Our Lady of Ransom Parish Council Boards. Fritz also donated over 35 gallons of blood through the Red Cross Blood Draw. He honored his belief in his children, family and faith.

He was preceded in death by his parents; two infant brothers, Ronald at 2 months and Delbert at 24 months; sister Carol Keller in 1998; brother Neil Keller in 2005; son-in-law Rob Compton; two nieces: Stacy and Jamie Keller; and two nephews: Travis and Noah Keller.