Argos win round one on the mat 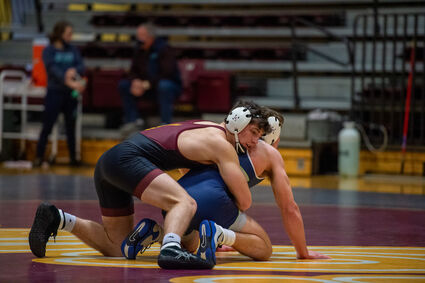 Montana State University-Northern's Connor Harris, left, battles in a 157-pound match during the Lights' dual with the University of Providence Argos Thursday night in the Armory Gymnasium. Harris won, but the Lights fell 21-13.

The Montana State University-Northern wrestling team was finally making its Armory Gymnasium debut, albeit without fans. But, the one and only time Northern got to wrestle in its own gym this winter, didn't exactly go to plan.

Thursday night in the Armory, the Lights dropped the first salvo in their annual rivalry with the University of Providence, as the No. 22 Argos beat the No. 13 Lights 21-13.

"I'm glad we got matches in," Northern head coach Tyson Thivierge said after the tough loss.

The Lights came into the dual undefeated in the season, and they ended the night with a pin by star...