Miles City to host Class A state wrestling, B-C will be in Sidney 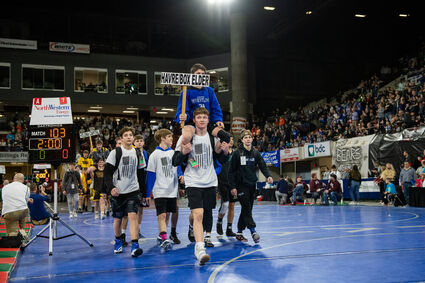 The Havre Blue Ponies march in the annual Parade of Athletes which kicked off the 2019 All-Class State Tournament last February in Billings. The state tourney is one of the biggest sporting events in Montana each year, but because of the ongoing coronavrius pandemic, there will be no such event in the Metra this winter. Instead, Class AA, A and B-C will hold separate state tournaments, with Miles City hosting the A event, and Sidney taking the B-C event, the Montana High School Association announced last week. For now, state basketball tournaments will go on as scheduled in Class A, B and C, but that is also subject to change.

Winter sports have reached the second month, and the postseason is drawing closer and closer. As such, the Montana High School Association held a meeting via Zoom last week to make several finalized plans for the upcoming postseason, which will be held during the ongoing coronavirus pandemic.

Of course, one of the biggest changes to winter has come in the way of wrestling, as the season was delayed by a month, and the state tournaments pushed back to March 5-6. Also, there will be no All-Class State Tournament in Billings this year due to the pandemic.

Instead, Class A state wrestling wi...