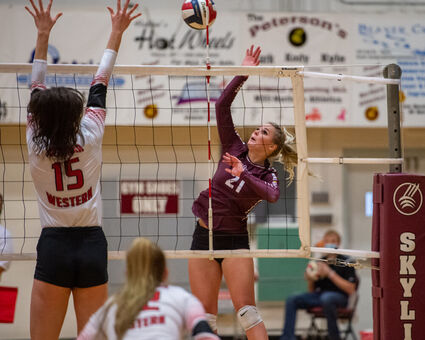 Montana State University-Northern's Rylee Burmester smashes a shot during Friday's night's Frontier Conference match against Montana Western in the Armory Gymnasium. The Skylights beat the Bulldogs in their season-opener, their first win since 2017

Not only had the Montana State University-Northern Skylights had to endure an entire year without competitive volleyball, they also were sitting on a streak that no one likes to talk about.

That's right, Northern, like the rest of the Frontier Conference, missed out on the entire 2020 season due to the pandemic, but, unlike the rest of the Frontier, the Skylights had also gone more than three years without a win, of any kind. But all of those waits, for a new season, for a home match, and for the streak to be over, came to an end Friday night inside the Armory Gymnasium, as the Skylights...