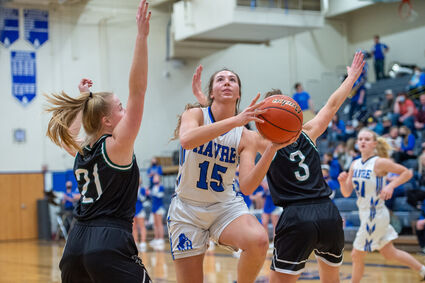 Havre High's Loy Waid, right, looks to score during Saturday's Eastern A game against top-ranked Billings Central in the HHS gymnasium. The Ponies fell short against the Rams one night after thumping Glendive.

It seemed like forever ago that the Havre High girls basketball team had played in the Blue Pony Corral. But Friday night, the Ponies were back in their old stomping grounds, and they ran all over the Glendive Red Devils.

Inside the HHS gymnasium the Ponies cruised to a 57-23 win over the Red Devils, which assured Havre of another Northeast A title.

Havre, which has been on fire offensively of late, wasted little time igniting that fire either. The Ponies started the game on a 16-0 run, then held Glendive to just four points in the second and third quarters combined. By the time that sti...