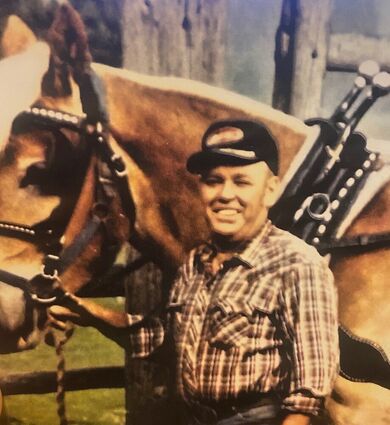 Today, Feb. 2, 2021 my friend, my partner and father to our wonderful children made his final ride into the sunset. Frederick J. Richmond was born March 8, 1936, in Whitefish Montana, to Fred and Helen Richmond. He joined five brothers and one older sister. Raised in the Flathead Valley, Fred helped his brothers cut and sell firewood and Christmas trees at a young age. He learned about farm life and how to care for animals. As a teenager, he pulled lumber at the local sawmill. In Wyoming he took work in the stock yards and in north Idaho he drove log truck, was a laborer at Kaiser Aluminum and the Sunshine silver mine. He traveled to New Mexico to work on road construction and in a uranium mine.

In 1968, he returned to the Flathead to work at the Anaconda Aluminum Plant. He bought a small farm south of Columbia Falls where he raised cattle, horses and always a great hay crop. Fred joined the Rocky Mountain Riders Saddle Club. He enjoyed competing, making life long friends and helping maintain the grounds for rodeos and Omak sees. The annual beef barbecue was always a big hit with members.

In the spring of 1976, he met Cheryl Thompson, one of the first women to be hired at the plant. They became fast friends and married a year later. They welcomed a daughter, Jenni, into their life and, three years later, she was joined by brother Ben. Having his own children late in life was a dream come true for Fred.

During the next 20-plus years there was lots of activity. Building a log home on a daylight basement, growing a big garden every year and helping Cheryl learn how to put it up. Fred worked shift work, but was able to follow both of the kids activities quite often. Jenni's basketball, volleyball, choir and band. Ben's baseball, wrestling and high school rodeo. The family continued with saddle club activates, along with raising Belgian draft horses. The older team pulled a covered wagon in local parades, worked in the hay field and were good for a fun hay ride. Fred had lots of energy to keep up with everything even though it meant working day and night many times. He believed we should work as a team and it worked very well for both of us.

In 1998, he retired from the plant, but a short time later was working part time at Weaver Gravel, as a loader operator. He just had to stay busy! Fred was a well-known prankster, at work with his Mickey Mouse cap and his stories from the past could keep you laughing for hours.

In 1999, Fred gave his daughter in marriage. It was hard to realize his baby girl was all grown up. She and Josh May gave us two beautiful grandkids, son Dalton and daughter Harley. Fred never believed he would live to be a grandpa. Jenni told him he better have cookies and milk for the kids when they came to visit! In 2002 we lost her to a tragic motorcycle accident.

Fred decided to move to Havre to be near Ben. He helped Cheryl buy a toy store (Punkin Doodle's) and spent 15 years helping and greeting people with a big smile. He and Ben had many adventures fishing, hunting, and enjoying NRA rodeo together. He truly enjoyed his life. In 2012, Ben's marriage brought twin grand-daughters, Eva and Avery, into his life making him a happy grandpa again. Over the past 45 years Fred has worked hard, played hard, made many friends, helped others when he could and generally made life better for those nearest his heart. He was very proud that both his kids graduated from high school, something he was not able to do because he went to work full-time after eighth grade.

Happy Trails to you, my friend, until we meet again.

At Fred's request there will be no funeral. He will be interred next to Jenni in Columbia Falls at a later date.