Northern hosts Argos one more time in the Armory 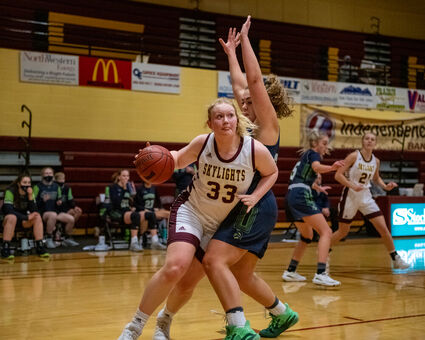 Montana State University-Northern's Sydney Hovde, left, goes around the Providence defense during a Frontier Conference women's game last month in Havre. The Argos are back in the Armory Gymnasium tonight for a rematch with Northern, after the Skylights weren't able to play their two road games in Great Falls two weeks ago due to COVID-10.

The road, was let's just say, not too kind to the Montana State University-Northern men's and women's basketball teams this past weekend. And while there still won't ba fans in the stands, the Lights and Skylights are, no doubt, still happy to be back in the Armory Gymnasium.

Northern starts a three-day home stand tonight when the University of Providence Argos come to Havre for Frontier Conference doubleheader. Only the Skylights won't play the Argos at 5, instead, it will only be a men's game tonight due to, what else, COVID-19.

The women's game between the two rivals has been called off due to contact tracing within the UP program.

For Northern (3-8, 4-11), and head coach Chris Mouat it's tough because the Skylights were excited to play the Argos for just the second time this season. And because the Skylights were anxious to play again after a difficult road trip last weekend. MSU-N missed games against the Argos two weeks ago because of COVID, then went to Helena to face nationally ranked Carroll College short-handed last weekend. The Skylights battled the Fighting Saints down to the wire last Saturday night, but ran out of gas in a tough loss Sunday.

"It's a bummer," Mouat said of not getting to play the Argos. "We were looking forward to it. We needed this game. We were excited about the chance to get back out there."

Even though the Skylights did struggle at Carroll last weekend, Mouat was not looking back, but instead, he was looking ahead to the Argos (6-4, 6-4), who have a win over Northern already last month in the Armory, and who boast the best guard-forward combo in the league in senior PG Emilee Maldonado and senior F Parker Esary. Together, the Providence duo accounts for more than 30 points per game, while Esary leads the league in rebounding, and Maldonado in assists and steals.

"Providence is another really good team," Mouat said. "They have two of the best players at their position, not only in the Frontier Conference, but in the nation. Parker Esary is a dominant post player and has been for years. She is a double-double machine. She is a force on the boards and just a very, very good player. Emilee Maldonado is as good as it gets at the point guard spot. She can hurt you from anywhere and also does a great job setting up her teammates. They are far more than just a two-person show, too. They have great depth and a ton of kids that can hurt you both to the rim and from the three. Bill (Himmelberg) does a great job with the program."

The Skylights are good, too though, especially when they're healthy and at full strength. Peyton Kehr, McKenzie Gunter and Tiara Gilham all average double figures for Northern, while Sydney Hovde is second in the league in rebounding, and Allix Goldhahn is one of MSU-N's best 3-point shooters. Add to that the steadily improving play of true freshman L'Tia Lawrence and sophomore Ryley Kehr, and the Skylights know they can play with anyone in the Frontier. Mouat said, they just need to keep improving, which they'll now try to do at home this weekend against Montana Western.

The Lights meanwhile, will not have to wait till Saturday to play. They'll still take on the Argos tonight, and they, too, plan on playing better.. They lost two tough games at streaking Carroll last weekend, and tonight's game against the 11th-ranked Argos (10-1, 10-1) will be a huge test. However, Northern knows what it takes to beat the Argos because the Lights are the only team to have done just that so far this season. MSU-N beat UP two weeks ago in Great Falls in a high-scoring affair.

Still, head coach Shawn Huse won't let his squad rest on that. UP has All-American Zach Darko-Kelly, who leads the league in scoring and rebounding, as well as workhorse forward Jaxen Hashley, and a deep roster that includes five double-digit scorers in all.

"The Argos certainly have the capability to put up points in a hurry," Huse said. "Getting stops and scoring against them is no easy task. I really like the strides we have taken this year. We will have to keep improving this week if we are going to find success against them."

The Lights (5-7, 6-7) have taken strides all season, especially behind the senior duo of Mascio McCadney and David Harris, who average over 18 points per game each. Jomel Boyd and Aaron Collins have also come on strong, while forward Jesse Keltner is working his way back into shape after missing much of the first part of the season with injury. 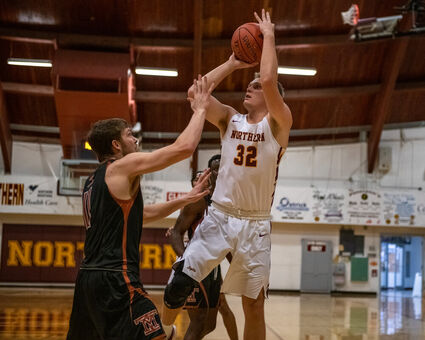 Northern's T.J. Reynolds shoots over the Montana Tech defense during a Frontier Conference men's game last month in the Armory. The Lights are home to face the nationally ranked Providence Argos tonight. Northern and UP didn't meet the first time the Argos were supposed to come to Havre due to COVID-19 with the Argos.

The Lights begin their three-game home stand tonight at 5 against the Argos, Northern is back in the Armory Saturday and Sunday for their regular season home finales against the Montana Western Bulldogs.