Argos freeze the Lights in the Armory 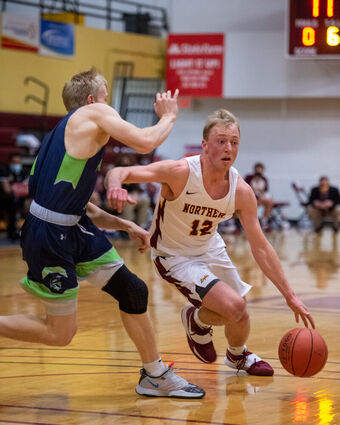 Montana State University-Northern's C.J. Nelson, right, drives around Providence' Dawson Fowler during a Frontier Conference men's game Wednesday night in the Armory Gymnasium. Nelson and the Lights fell to the No. 10 Argos, 80-66, in what was the third meeting between the two rivals this season. There was no women's game Wednesday due to COVID-19.

The Polar Vortex is firmly entrenched in Havre right now. But, it isn't just outside. For two stretches Wednesday night, it got awfully frosty inside the Armory Gymnasium.

In the final meeting of the regular season between the Montana State University-Northern Lights and 11th-ranked Providence Argos Wednesday night, Northern fell victim to two long scoring droughts in an 80-66 loss inside the Armory. It was the only game of the night as the women's game was canceled due to COVID-19 protocols.

The first half saw Northern go over nine minutes without a score, and the Argos rip off a 12-0 ru...