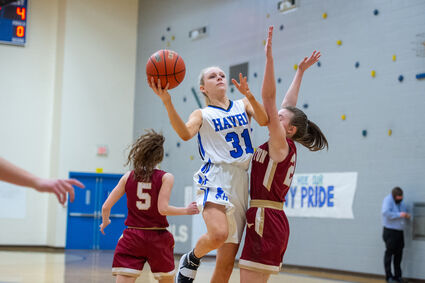 Havre High senior Quinn McDonald shoots during Thursday night's game against Fort Benton at the Havre Middle School. On senior night, in a game not originally scheduled, the Blue Ponies got all they could handle from the Longhorns in a 56-51 win.

It was an unusual senior night for the Havre High girls basketball team. First, their initial opponent, Browning had to drop out of the contest, putting the ceremony in danger. Then, undefeated Fort Benton agreed to fill in two days before the game would be played. But that came with the condition that the game could not be played at the HHS Gymnasium because Fort Benton would play at that gym seven days later for their District 9C Tournament. So, the Blue Ponies had to play the Longhorns at the Havre Middle School Gymnasium on Thursday night.

"It was weird, I haven't played here since mid...