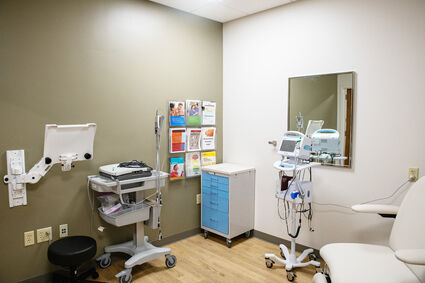 Equipment stands ready Jan. 14 in the Merril Lundman Department of Veterans Affairs Outpatient Clinic in Holiday Village Mall during a tour of the facility before its opening. The clinic has been open about a month and has been well-received, Registered Nurse Care Manager Teri Matosich said.

The Merril Lundman Department of Veterans Affairs Outpatient Clinic's new location in the Holiday Village Mall has been open for almost a month and Registered Nurse Care Manager Teri Matosich, who has worked for the clinic since its creation in 2009, said the new location is everything she hoped for.

The clinic's new location in the mall is almost three times larger than its previous location on 13th Street, near Northern Montana Hospital and features a number of significant improvements including a lab, a designated women's health room, improved telehealth infrastructure, space for an on-site social worker, and more.

"I love it," Matosich said.

She said the clinic has already seen new patients, which she credits partially to the VA's ability to hold COVID-19 vaccination clinics in the area, but also to the location itself.

The clinic is designed around the VA's Patient Aligned Care Team - PACT - model, which allows veterans' various needs to be addressed comprehensively by a team of health care professionals without the patient needing to leave the exam room.

Matosich said is feels great to tell the veterans they serve that they don't need to do anything and just let the staff come to them.

"When the nurse gets done they ask, 'Oaky, where do I have to go?' And we get to tell them, you can stay right there. ... They really like that," she said.

This, combined with the clinic's new laptops and computer system, is not only convenient for veterans, but for staff as well, who no longer have to log in and out of computers all the time, and can now just take everything they need from room to room, she said.

Matosich also said the structure of the clinic has improved communication between team members and the increased number of available rooms provides additional privacy for staff when making calls as part of their job.

She said the location has made patients' visits faster in general, but has also improved the efficacy of triage.

"It all works very well," she said.

Matosich said another thing she enjoys surprising veterans with is the fact that the clinic now has a full-time doctor on staff.

"They're always really thrilled to have a doctor on-site," she said.

The clinic has had doctors on staff off-and-on since first opening, but has been without one for some time.

She said the waiting area is also vastly improved, with a more-relaxing atmosphere and much more space that patients have commented on as well.

She said the new clinic's location in the Holiday Village Mall has made giving directions to new patients much easier as well.

"Veterans are really happy," she said. "... They love the decor and the connivance."

Matosich said she has yet to hear a bad word said about the new location but there are some things that are still being worked on, including getting the lab set up for on-site blood work.

She said this is a highly anticipate feature by both patients and staff.

She said the clinic is also waiting on some new equipment that has yet to arrive and some upgrades to computer system still need to be made, but even taking that into account, the new location is a massive improvement. 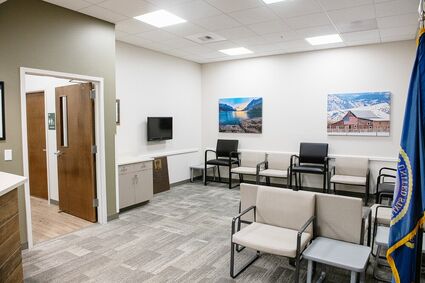 Matosich said COVID-19 did prevent the clinic from having a true grand opening, but she is excited for the open house that will be held when the pandemic is over and suspects it will be well-received.

She also mentioned that the VA's next local vaccination clinic for people getting their second dose will be Thursday of this week.

She said the Merril Lundman Clinic is recommending that local veterans get the vaccine as soon as possible and if they have questions or concerns about it to call the clinic.