The chase for the District 9C boys championship begins tonight 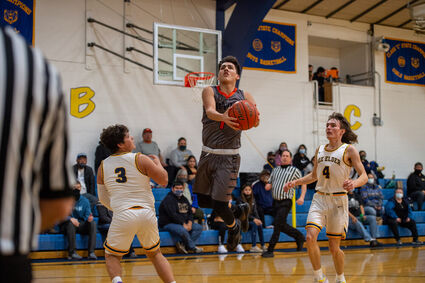 Ethan Bell and the Chinook Sugarbeeters have had yet another great season, and now they'll look to keep that going at this week's District 9C tournament, which starts tonight at gyms across the Hi-Line. Because of COVID-19, the tournament will have a new format, which includes only four games per day in the HHS gymnasium, Thursday throughSaturday.

There's no denying this year's District 9C boys tournament is going to look a lot different. For starters, there's the new format, which is due to safety procedures for the ongoing coronavirus pandemic. That's a big difference.

On the court, though, this year more than most, the tournament appears to be shaping up to be a two-team race. However, with three spots up for grabs, the tournament is never just a two-horse race, and this week won't be either.

The 2021 9C boys tourney does feature two Class C heavyweights in Fort Benton and Chinook, but the tournament, which begins today at four sites on the Hi-Line, and concludes Saturday in Havre, will be as tough as ever.

"The 9C is always one of the deepest districts," Box Elder head coach Jeremy MacDonald said before the start of the season in January.

Fort Benton is the top seed after going undefeated in 9C play and 14-1 overall. The Longhorns, led by veterans Hayden Diekhans, Jace Thompson and Billy Ullery, are also the defending 9C champions and are hungry for more after also winning the Northern C last winter.

"We need to make sure we aren't overlooking any one opponent and playing our style of basketball," Fort Benton head coach Tyler Pasha said. "Getting up and down the floor and taking care of the little things are so important during tournament time. A couple second chance points on a hustle rebound or a deflection to set up a fast break could be the difference in winning or losing."

The Longhorns shouldn't have any trouble doing that tonight against Hays-Lodge Pole (2–11). It was a tough year for the Thunderbirds, after dealing with COVID and more. However, they have a top scorer in Estavan Granados, and they always play tough in the tournament, which starts for them tonight at 7 p.m. in Fort Benton.

The winner of that game will play the winner of tonight's game between fourth-seeded Big Sandy (6-7) and fist-seeded North Star (6-8). The Pioneers were the big story in last year's postseason, making it all the way to the Northern C title game. However, this year has had its ups and downs, but with Kody and Kade Strutz, as well as the emergence of Laine Demontiney and Brayden Cline, the Pioneers might just be posted for another run this week. To do that, though, they'll have to get past North Star tonight at home. The Knights have been an upstart all season long and are knocking on the door of really contending. With Garrett and Gavin Spicher, Payne Ditmar and Jaden Sargent all having plenty of tourney experience, Karston Donoven's club is certainly one to watch this week.

The bottom half of the draw pits third-seeded Box Elder against sixth-seeded Chester-Joplin-Inverness tonight at 7 in Box Elder. The Bears (10-5) really came on strong this season and are looking to return to the Northern for the first time in four years. Led by the likes of Malique Rosette, Gabe Saddler, Kadyn Duran and more, the Bears are an explosive team that now has the experience to go with it. However, the Hawks (4-9) are not to be overlooked. Kyle Harmon, Kealy Haaland, Bryce Kamerzell and others are very talented, they just haven't had the experience yet. But they'll no doubt put up a big fight this week.

The winner of that first-round game meanwhile, will meet either second-seeded Chinook or seventh-seeded Turner in the semifinals. The Sugarbeeters (12-2), of longtime head coach Mike Seymour, have been very powerful again this season. Led by star guard Ethan Bell and the inside presence of Reese Elliot, as well as so much more firepower around that duo, the Beeters are certainly a team that can run the table this week. And that journey starts tonight at 6 against the Tornadoes (2-12). It's been another tough season for Turner, but they do have high-scoring Shane Kimmel, and as is the case every year, no one can afford to overlook them.

And no one can afford to look ahead anyway. The format this year will be a daunting one. After tonight's first round, there will be a pair of loser-out games at the higher seed's home gym Wednesday. Then, the semifinals will be played at 3:30 and 6 p.m. Thursday in Havre, followed by the consolation semifinals Friday at 3:30 and 6 p.m. The consolation game is set for Saturday at 1 p.m. and the championship game is slated for 6 p.m. Saturday night in the HHS gymnasium. 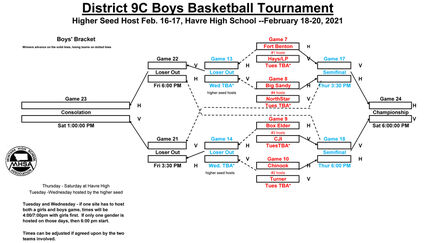 As always, the top three teams will advance to next week's Northern C, and, once again, that won't be an easy task for anybody, perhaps even more so during this unusual season.

"This is a year unlike any other," Pasha said. "There have been so many unknowns for when games will be played, if they will be played, to what kids will be available to participate from week to week. It's definitely been challenging, but we are just grateful we get to keep playing and bringing back some normal to our community. The tournament will be no different. The format is a little different so that will be an interesting first round game and then the time between each game will make it seem a little less like a tournament, but we need to stay focused and play each game like it could be our last."