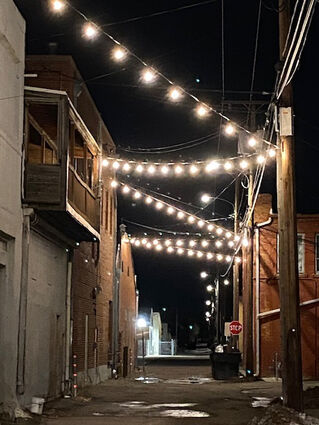 Lights hang above the alley on the 300 Block of Second Street as part of a downtown beautification project.

The Havre group Downtown Montana Matters has been working to beautify the alley between Second and Third streets and Third and Fourth avenues with LED lights and artwork as part of their mission to make the town more enjoyable to walk in.

One of the group's members, Debbie Vandeberg, said the organization, formerly called the Havre Main Street Group, was created as a result of a meeting years ago about becoming an official Main Street program through Montana's Department of Commerce.

The group operates under that program now but has maintained its goals and functions held since its creati...