Severe winter weather in other parts of U.S. also predicted to let up 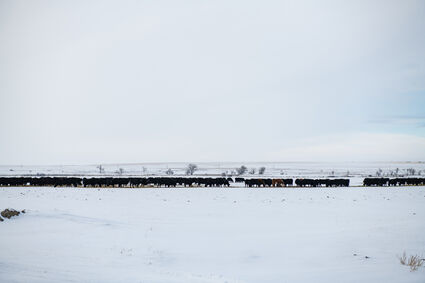 Cattle feed Tuesday in southern Hill County. The high temperature in Havre that day was 13 degrees, following a low of 34 below zero Sunday morning, but temperatures in this region are expected to warm considerably by the weekend. HIghs in the 40s are in the forecast for Sunday.

While forecasters predict this part of Montana will move out of the bitter cold snap it has been under for more than a week, other parts of the country continue to reel from severe winter weather, although that also is expected to let up in upcoming days.

The forecast for this part of north-central Montana calls for highs in the 20s today with lows tonight in the single digits in most of the region and up into the teens near Big Sandy.

The predicted highs are nearly 50 degrees warmer than the lows just a few days ago, such as Havre's low of minus 34 at 3:45 a.m. Sunday. The high in Havre Sunday was minus 4 and the high for Havre last Thursday was minus 13 with a low of minus 29.

And the forecast calls for temperatures to continue to go up, with the highs Sunday expected to be near or in the 40s with lows near freezing that night and temperatures in the mid- to upper-40s by Monday.

And much of the rest of the country also has been in severe weather as a series of storms dropped temperatures - to below zero in some parts of Texas for the first time since the 1980s and the coldest temperatures in many other locations in decades or even more than a century - dumped snow, disrupted power and shut down water service.

Literally millions have been without water or power or both in parts of the country in the past week as a result of those storms.

The Weather Channel reports that the latest storm will continue to bring snow, sleet and freezing rain and cold temperatures into the East through Friday, although much of the storm has let up in parts of central Texas into the lower Mississippi and Tennessee valleys.

Weather channel reports the cold will hang on for the next several days in parts of the South before a more pronounced warmup in Texas, Oklahoma and other parts of the Plains.

AccuWeather reports shifting weather patterns also should bring warmer weather to the East by the weekend into next week.

And the weather could be reversing itself in this part of Montana over the next few days, although a wind chill advisory was in effect for Blaine and Hill counties through 9 a.m. this morning, and the forecast calls for wind chill values in those counties as low as minus 10 tonight.

A winter weather advisory with high winds and blowing snow also was in the forecast for Montana's northern Rocky Mountain Front through Teton County until 11 tonight.

But the temperatures are expected to shift nearly 70 degrees warmer in this region through the weekend and early next week, although, for the time of year, they won't be nearly as unseasonably warm as earlier in the winter.

Havre saw a high of 64 degrees Feb. 2, 33 degrees warmer than the normal for that day - although not a record high for that date - before the temperatures started to drop and the first snow in weeks began to fall.

The region had seen a very mild winter before the cold snap.

This part of Montana saw snow in the fall, with Havre recording 19 inches in October and November, but then the winter weather stopped, including seeing the second-lowest amount of snow for Havre in recorded weather history for December, .7 inches.

And i no measurable snow was recorded in Havre in January, just a trace.

While the highs on some days in the area were below freezing - though nowhere near below zero - most days in December and January saw highs in the 40s and even 50s.

The warmer weather expected to follow the past two weeks of bitter cold is not predicted to bring as unseasonably warm high temperatures, although the predicted highs in the 40s Sunday and Monday will be nearly or more than 70 degrees warmer than the cold temperatures over the weekend.

The normal highs for this time of year in this part of Montana is about 34 degrees.

The forecast at the far end of Weather Service's predictions, next Tuesday, lists high temperatures at about normal for this time of year, in the low- to mid-30s.