Basketball, the 9C tourney, the farm, it's always been a family affair for CJI's Kyle Harmon 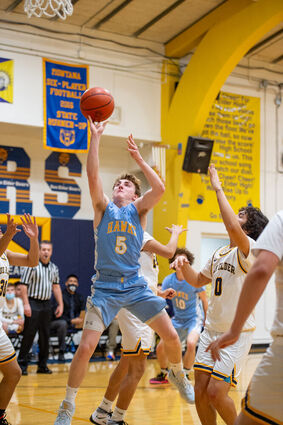 Chester-Joplin-Inverness' Kyle Harmon goes in for a shot during the first round of the District 9C boys basketball tournament Tuesday night in Box Elder. Harmon is a generational player for the Hawks, as he's had siblings, including younger brother Blake, play for CJI basketball, as well as other sports. Harmon, who also plays football and runs track for the Hawks, led CJI in scoring Tuesday night, while the Hawks played in the loser-out bracket Wednesday. For full District 9C coverage, stay tuned to the Havre Daily news all weekend as the tournament moves to Havre today through Saturday. And see a full wrapup of all the 9C action in Monday's Hi-Line Sports Roundup.

Coming from a basketball family may pressure some under the weight of expectations, but for Chester-Joplin-Inverness junior Kyle Harmon, he sees it as an advantage.

"They can teach you a lot, definitely learned a lot from them. They can pick up on your mistakes, help you get better," Harmon said.

That advantage has allowed Harmon to become a key contributor for the CJI Hawks' offense. He was coming off a game against Box Elder Tuesday night where he led the team with 18 points in a losing effort in the opening round of the 9C tournament.

Of course, playing sports at CJI is a family a...