Back to the Bears: Kyla Momberg doesn't miss a beat 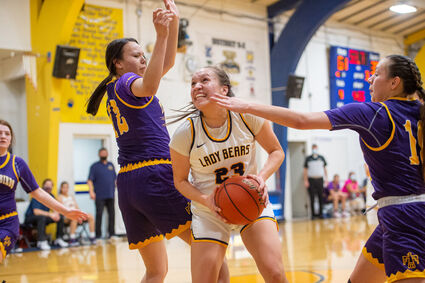 Box Elder's Kyla Momberg, middle, splits the Hays-Lodge Pole defense during Tuesday night's 9C tournament game in Box Elder. Momberg is a former state champ for the Bears, who spent last season playing in Spokane. Now though, she's back and helping the Bears try to return to the top of the 9C.

In just three seasons playing for the Box Elder girls basketball team, Kyla Momberg has gotten to be a part of experiences that most players could only dream of. Her most noteworthy achievement was being a key contributor for a state championship team in 2019, the second in a row for the Bears.

"I still think about it to this day. Every time somebody asks me a question, that always comes up. It's a good feeling all around. Just knowing what went on and that I was able to be a part of that group of hard workers," Momberg said.

Last year, Momberg also got the opportunity to play in a to...