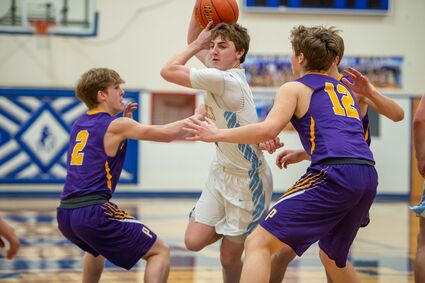 Action from Friday's boys loser-out game between Big Sandy and CJI in Havre.

Both the District 9C Boys and Girls Basketball Tournaments continued on Friday at the Havre High Gymnasium and like most of the past year, was full of uncertainty and excitement. One team had to forfeit their game on Friday while another team did not know until the morning of if they would even play. Two teams had to go to overtime to see who would move on to the consolation game.

Only one game seemed to avoid its share of drama. Five and half minutes into the game, Box Elder had failed to score a single point and trailed by eight points to Chinook. It looked like the loser-out game in th...