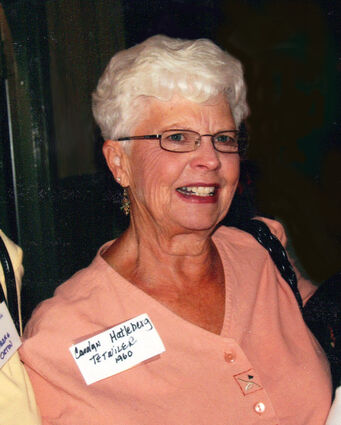 She is preceded in death by her beloved husband of 53 years, Philip Irving Tetwiler, and her parents.

Carolyn, lovingly called "C.F." by her sisters, was born July 23, 1941, the middle child of three daughters to Clifford and Jennie Hatleberg in Havre, Montana. Carolyn was a member of First Lutheran Church in Havre. She had a beautiful voice and sang in church and school choirs and often could be heard singing and humming in her home. She attended all her schooling in Havre, graduating from Havre High in 1960.

Carolyn graduated from Kinmen Business University in Spokane, Washington. She broke the record for shorthand transcription - 280 words a minute! it took two people to dictate to her to accomplish this amazing feat.

Through a mutual friend, she met her future husband, Phil, who was stationed at Geiger Field. During their 20 years as an Air Force family, Carolyn experienced some of her most cherished moments in life. They were twice stationed in the United Kingdom and traveled all over Europe with family and friends.

Carolyn was an accomplished baker and cake decorator and once was a finalist at the annual Pillsbury Bakeoff Contest. She often delivered her famous cinnamon rolls, coffee rings and Easter basket cakes to friends, family and coworkers. Carolyn will be remembered as a loyal wife, caring mother, doting grandmother, loving daughter and sister and generous friend. She will be missed.

A private viewing was held at Vassar-Rawls Funeral Home prior to Carolyn's cremation. Some of her ashes will be spread over the family farm north of Havre as she wished. The rest will be interred above her husband at Lewis-Clark Memorial Gardens. A celebration of life will be planned later this spring.