HHS boys and girls both win on day one in Billings, setting up semifinal games tonight 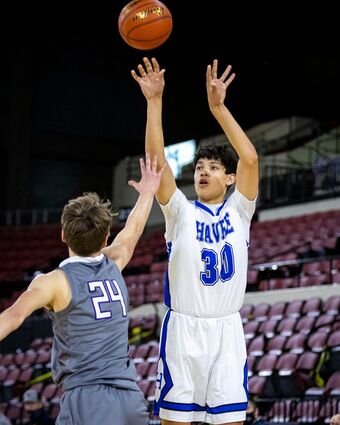 The Havre High boys and girls basketball teams don't play Livingston in conference play anymore. But the Blue Ponies both got a chance to renew that rivalry in the opening round of the 2021 Eastern A Divisional Tournament Thursday in Billings.

The Havre girls kicked things off Thursday morning with a 50-23 blowout win over the Rangers, pushing the Ponies into today's semifinal against arch rival Hardin.

The Ponies had some early tournament jitters, leading just 13-10 early, but they increased that lead to 28-18 at halftime, then completely took over in the second half. Havre shutout the Rangers in the third period, and finished the game on a 22-5 run to advance.

Senior Loy Waid, playing in her fourth Eastern A, led the Ponies in the win with 12 points. Sadie Filius added 11 points, for Havre which will now get ready for a third meeting this season with the Bulldogs. Hardin beat Sidney in the opening round to advance to the semifinals. Havre lost to Hardin back in January at the HHS gymnasium, but rebounded to beat the Dawgs in Hardin earlier this month.

The semifinal between Havre and Hardin will tip today at 4:30 p.m. with the winner to face either Billings Central or Glendive in Saturday afternoon's championship game.

The Havre High boys want to go to the state tournament. That's the mission, and the Ponies got off on the right foot Thursday afternoon with a 69-47 win over Eastern A rival Livingston in the first round of the divisional tournament in Billings.

The win over the Rangers pushed Havre into tonight's semifinal where the Ponies will take on Billings Central.

"Going down to divisionals you never know what to expect out of opening round matchups," Havre head coach Walynn Burgess said "I felt like the boys really locked in and got focused on the game plan we had laid out for the game. Our defense did a really good job of pushing their shooters off of the line and creating turnovers. I thought it was the main reason we were able to come out on top of that matchup."

Havre got to the semifinals with a dominant first half. Havre came out on fire with a 25-8 run in the first quarter, and while Livingston rallied in the second, the Ponies still led 46-25 at the break, and they cruised home from there.

Sophomore Isaac Pedraza led a balanced Havre attack with 16 points, while Josh Warp and Caden Jenkins each scored 11 and Max Olson chipped in with 10. Nolan Lotton also had a key game defensively.

Havre will now face Central in a semifinal game tonight at 6:30. The winner will play either Laurel or Glendive in Saturday's championship game.

"The best part about this week is we know we have to turn around tomorrow and do it all over again and this time against a really good team in Billings Central," Burgess said, "We are excited about this opportunity that is in front of us and can't wait to take the floor again tomorrow night (tonight)."

All of the boys and girls Eastern A action takes place at the First Interstate Bank Arena in Billings, where the top four boys teams and top four girls teams advance to next week's Class A state tournament in Great Falls.