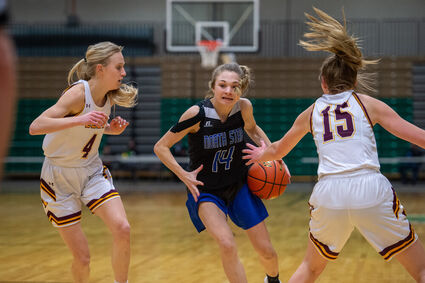 North Star's Jade Wendland, middle, drives through the Belt defense during Thursday night's Northern C girls semifinal in Great Falls. The Knights continued their amazing run with a narrow win over the Huskies, setting up a rematch of last weekend's 9C championship game with Fort Benton.

GREAT FALLS - North Star is having some kind of special postseason. And as the Knights attempt a run in the Northern C Divisional Girls Basketball Tournament, they are now just one win away from doing that after they defeated Belt, 37-32, Thursday night at the Great Falls Four Seasons Arena.

The teams went back-and-forth in a defensive struggle. North Star held a 21-14 lead at the half, but the Huskies battled back to take a 28-27 lead with just under six minutes remaining in the game.