Fort Benton girls prevail in the "The Rematch" 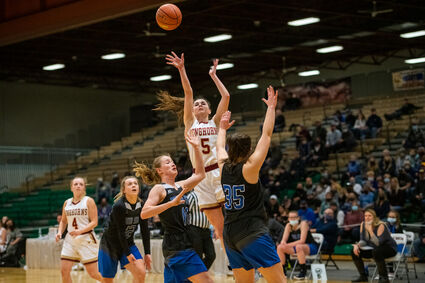 Fort Benton's Aspen Giese shoots over the North Star defense during Saturday's Northern C girls championship game in Great Falls. In a rematch of last week's 9C championship, Fort Benton turned the tables on the Knights, and punched their first ticket to the Class C state tournament since moving down from Class B. North Star, meanwhile, plays Roy-Winifred in a winner-take-all challenge game today in Great Falls.

GREAT FALLS - Fort Benton's hopes of winning its fourth straight District 9C Tournament title were dashed when they were upset by North Star in the championship game Saturday.

The Longhorns rebounded to make a run to the Northern C Divisional Girls Basketball Tournament championship game and waiting for them was none other than North Star. It looked like North Star would get the better of them again as the Knights had control throughout most of the game as they led by nine points with about five minutes remaining in the game.

Hoping to avoid their second straight loss to North Star in a...