Lights come up short at UP in Frontier semifinals 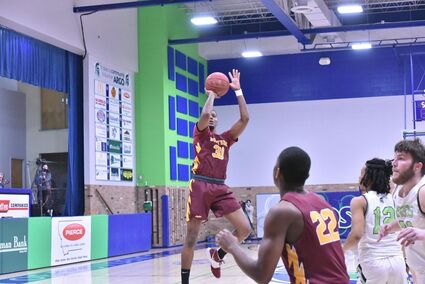 Montana State University-Northern's Allen Sims shoots during Saturday night's Frontier Conference men's semifinal game at the University of Providence in Great Falls. The Lights fell to the top-seeded Argos in a low-scoring affair, bringing Northern's season to an end. The Frontier wraps up its playoffs with the men's championship game Tuesday night.

Perhaps no one played the University of Providence Argos tougher than the Montana State University-Northern Lights did this season. And, in the Frontier Conference semifinals, the Lights, the only team to beat UP at home this season, once again gave the Argos all they could handle.

However, UP has Zach Darko-Kelly, and with the Argos clinging to a three-point lead, and the shot clock about to expire, Darko-Kelly rose up and nailed an 18-foot jumper with :40 left to seal a 63-56 win for the Argos in the McLaughlin Center, bringing Northern's season to an end.